Peace Committee of Turkey: “The operation against Syria is unacceptable”

“The sovereignty and territorial integrity of Syria has been violated. Our troops must immediately return home, and Syria’s sovereignty should be respected” 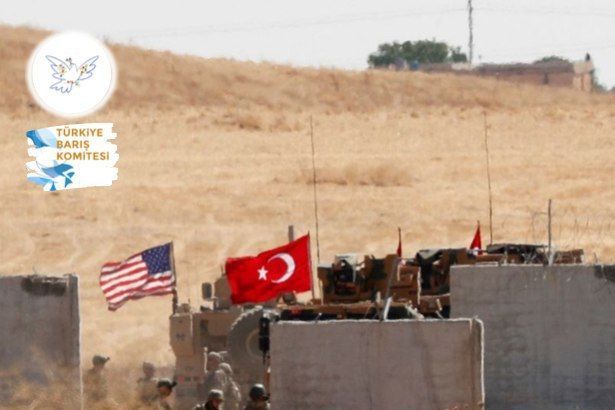 The Peace Committee of Turkey released a statement on October 10 regarding the AKP government’s military offensive into northern Syria. “The operation against Syria is unacceptable,” the Peace Committee says, stating that the Syrians should determine the future of Syria.

THE OPERATION AGAINST SYRIA IS UNACCEPTABLE

The air and land operation launched by the Turkish Armed Forces into northern Syria will drag our country, and Syria, which has been in huge chaos for a long time, into a deeper turmoil. This turmoil will inevitably impact the Middle East in general.

The AKP government has launched this operation after some negotiations and agreements with the US. It would be impossible for the US to reach such an agreement without protecting its own interests. The extremely limited military withdrawal of the US has clearly proved this fact. Although the AKP government seemingly declared US imperialism as almost an enemy; it, indeed, has come to an agreement with the US in accordance with its interests.

The quickly taken decision of the US has apparently revealed again that it is impossible to make friendship with any imperialist power. Supposing a friendship with imperialism, considering autonomy and regionalism or nationalism as a solution would not lead the peoples of the region to peace; in contrast, it would sow further chaos.

The sovereignty and territorial integrity of Syria has been violated. Our troops must immediately return home, and Syria’s sovereignty should be respected.

Turkey has launched this operation on the grounds of the security of the country. However, the operation has further diminished the country’s security because of the abovementioned reasons. The allegation of accommodating the Syrian refugees into this zone seems void.

As it always has been, one should look at somewhere else if they are to look for any element that threatens the security of our country or any other one. In fact, what threatens security is imperialism.

The imperialist powers must immediately keep their hands off Syria and the Middle East; this is the only road to peace. The Syrians should determine the future of Syria.