Palestinian Democratic Youth Union: We Will Continue to Struggle

A youth symposium with the participation of various leftist and progressive youth organizations took place on the 43rd anniversary of the foundation of Palestinian Democratic Youth Union. 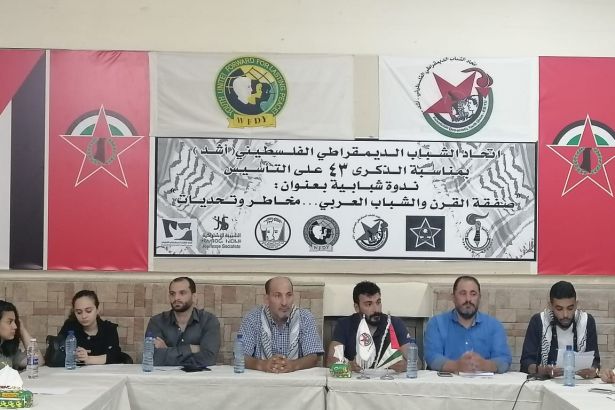 On the occasion of the 43rd anniversary of its foundation, Palestinian Democratic Youth Union (PDYU) organized a youth symposium at the martyr "Abu Adnan Qais" hall in the Marlias camp in Beirut. Many leftist and progressive youth organizations around the Arab world and World Federation of Democratic Youth (WFDY) participated in the symposium and shared their solidarity with the Palestinian cause.

Following the welcome speech of the symposium, Adnan al-Miqdad as the President of the Lebanese Democratic Youth Union and the Deputy President of “WFDY”, underlined the international support to Palestinian people and youth in its struggle against the brutal imperialism that practices injustice, racism, occupation and plundering the wealth of people. Al-Miqdad emphasized “Deal of the Century” will be doomed to failure as previous liquidation projects have failed by struggles and resistances of the Palestinian people.

Abdullah Ashkanani as the President of the Kuwaiti Democratic Youth Union stressed the importance of supporting the right of Palestinians to establish a fully sovereign, independent Palestinian state, Jerusalem being its capital against the Zionist imperialist conspiracy. Younes Siraj from the Socialist Youth Organization of Morocco specified the necessity of categorical rejection of all American-Zionist colonial projects. Siraj stressed that as long as Palestinian people are on the ground, being militant and free, they have the will, adherence, and steadfastness for liberation from the chains of imperialism, injustice, and occupation.

Afterward, as the Secretary-General of the Palestinian Youth Organization, Haitham Abdo asserted that history taught Palestinian people that the will of the people is able to defeat imperialism if Palestinian youth and people mobilize and employ their energies in the ongoing conflict. Abdo emphasized the religious extremist character of the Zionist movement as the legitimate son of imperialism. Hussein Habib as the Secretary of the Executive Committee of the Iraqi Democratic Youth Union stressed their persistence stance in supporting the Palestinian people and their heroic struggle against the brutal Israeli occupation, and in supporting their legitimate national rights.

The symposium concluded with the speech of the Secretary-General of the “PDYU,” Yusef Ahmed, who saluted Palestinian, Arab, and international organizations participating in the symposium, to commemorate the 43rd anniversary of the founding of the "PDYU". Ahmed indicated that the founding of the Union came at a crucial and delicate stage in the life of Palestinian people and the Palestinian revolution, in light of the reality and major challenges of Palestinian Youth. Ahmed expressed the Union’s role in the struggles of leftist and progressive youth in the Arab world and globally, consequently gained its position in the “WFDY” and in many youth and student frameworks involved in the struggle against imperialism, Zionism and all forms of oppression, colonialism, occupation, exploitation and racist discrimination.