"The communists settled on the lines they represent the people, citizens, conscience, justice, and labor, and if the election happens without any surprises, they will strengthen their "power of representation" in all possible outcomes" 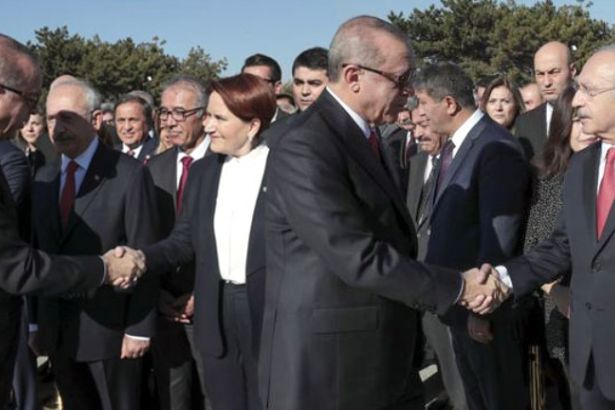 SoL columnist Aydemir Güler wrote on how Turkey's opposition parties closed the difference between themselves and the ruling conservative AKP by presenting themselves "religious", especially during the recent electoral competition.

There are hegemonic ideas - or dominant ideology - and they are in power.

It is not abstract, not complicated at all. Among those commenting on April 1 [just after the local elections], some said: "The AKP is losing, but its ideas are being settled in power". What they meant was mainly religious fundamentalism. While the Islamist party was losing elections, the opposition was abandoning secularism. Islamism was declared a common denominator of the politics in Turkey.

Do not think that the opposition cannot do anything and everything is in the hands of the AKP government. It is the opposition that realizes my last point, making Islamism the common denominator of the political structure.

Right-wing opposition is already Islamist. For a long time, the Kurdish opposition has placed Sunni Islam in a respectable position among its identities. What was critical is (social-democratic) Kemalist and socialist stance.

The first one became pretty Islamist in this process. This is an important point, it was Kenan Evren's project the project: Organizing rallies with reading Quran verses. The Kemalists and social democrats overcame Evren after maintaining a distance of about 40 years and went beyond rambling Quran verses into the rally. They tried starting the rallies with prays and making the masses say "Amin" altogether. By the way, I can confidently say that this tactic will not work. If the AKP could not make it work, they can't do it at all! But I have to add that socialists seem to be at least attracted to the same religious reactionism.

And this opposition is determined by the hegemonic powers, the hegemonic ideas, the dominant ideology. What we call for the area out of this circle is communism in 2019. A non-communist secularism can, of course, be defined. But this part of the spectrum is now closed. Non-communist laicism is not represented in politics. The discourse around "being in the same boat" is very illustrative and shows that there are so many complementary issues of religiousness. The discourse on "we can govern together" is the call of the bourgeois opposition to "be in the same boat". There is the ruling party that kicks people out of the boat on the one side and there is the opposition that does the talking "we are in the same boat"! Today, the opposition is the movement to save the ship of the establishment.

The opposition criticizes exaggeration, immorality, and enmity, and declares everyone in the country a patriot or a good citizen.

It was a great historical progress once to say that all people were born equal. Because at that time the aristocrats thought that they were powerful from the moment they were born. How else could the land ownership be explained? Is it possible to explain a piece of the earth by saying "I earned it because I worked so hard"? Declaring all people equal was a step forward, but it remained a lie. Because people were divided into classes and the assumption of equality would serve to cover this fact.

The opposition's stance that declares everyone patriot, citizen and human is a big lie in the year of 2019 in Turkey.

This lie dominates the world of opposition. This lie represents the hegemony that the bourgeois order established on the opposition.

Turkey is divided between laborers and exploiters, between those who try to justify and hiding exploitation and those whose interests lie in eliminating exploitation, between patriots and traitors. The communist line calls for the construction of another boat outside the circle. This is the revolution. But obviously, we are a minority.

First, the idea of revolution in the opposition will be marked so that the revolution itself becomes possible. So the revolutionary trials get in range. The communists will establish a popular movement. There are only signals yet. We are a small group of people and we are just in the beginning.

On March 31, "the real side" whose votes were stolen, whose victory was canceled, who was cheated is the main opposition CHP. The CHP legitimized this unfairness by accepting the redo of the election on June 23. Without this acception, the act of unfairness would remain as an attempt. A game that would not be played by more than half of Istanbul could not be played. No matter what the election council decides!

They are in the same boat. But we are small now. Our country seems far from the revolution. In the same sense, we have fallen apart from justice, secularism, humanity, too.

But June 23 will have another meaning. Maybe we will not be the majority in a short time. There will be no communists in the polls. But we are going to leap forward. The communists settled on the lines they represent the people, citizens, conscience, justice, and labor, and if the election happens without any surprises, they will strengthen their "power of representation" in all possible outcomes. (Actually, it would be the same if there were no elections, but that's another issue.)

If the AKP wins, those who see that it is necessary to get into the boat of communists in order to stop the most troublesome element of the establishment. They will say "This is not the way" and, unfortunately, we will be right.

If the AKP loses, for many people, it will now be time to think about the fact that the bourgeois order becomes more reactionist and the working people are not equal or free at all. They will say “So we deserve more”. There will be a lot of people turning their faces to the left, not believing in religious reactionism and in the thesis that the capitalists and working people are in the same boat.

We will continue to repeat that the June 23 election is not legitimate. We will be stronger after an election that we are not participating if we can explain this as widely and strongly as possible.