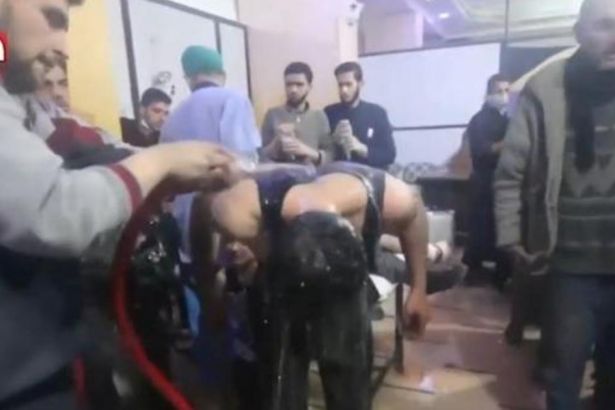 The Organization for the Prohibition of Chemical Weapons (OPCW) has announced Friday it had found no evidence nerve gas was used in an alleged attack on the Syrian town of Douma, but chlorine may have been deployed.

"The results show that no organophosphorus nerve agents or their degradation products were detected in the environmental samples or in the plasma samples taken from alleged casualties," the report said.

There had been claims that residents were victims of exposure to sarin gas -- but that has been ruled out by Friday's interim report.

OPCW fact-finding experts said they had found traces of organic substances containing chlorine, which also has legitimate industrial uses and had not previously triggered a U.S. military response.

"Along with explosive residues, various chlorinated organic chemicals were found in samples from two sites, for which there is a full chain of custody," the fact-finding team said in the report.

Chlorine is widely used for water purification and cleaning and "chlorinated organic chemicals" will be found in any household.

In April several media outlets, citing Al-Qaida-linked White Helmets in Syria, accused Damascus of using chemical weapons in Douma. In turn, Syria’s SANA news agency reported quoting Syrian officials that these allegations were merely a provocation by Jaish al-Islam group and other jihadist groups to hinder the advance of the Syrian army.

The purported chemical incident in Douma was used as the justification for the air strikes launched jointly by the United States, the United Kingdom and France. However, U.S. Defense Secretary Jim Mattis disclosed that the U.S. had not yet confirmed that the alleged Syrian chemical weapons attack, on April 7 in the Damascus suburb of Douma, included the use of sarin gas.

Washington and its allies launched the massive retaliatory missile strike against Syria, without waiting for the OPCW to start its investigation of the incident. OPCW sent the fact-finding mission to Douma in mid-April, roughly a week after the April 7 alleged attack.

OPCW warned that it was too early to come to conclusions about the alleged attack on the town of Douma, saying that "work by the team to establish the significance of these results is ongoing."

Meanwhile, in a separate report, the fact-finding team said it "cannot confidently determine whether or not a specific chemical was used as a weapon" in two earlier alleged incidents in 2016.

It said the two incidents had happened in the neighbourhood of Al-Hamadaniyah, on October 30, 2016, and in the area of Karm al-Tarrab, a few weeks later on November 13, 2016.