According to a new regulation of the Ministry of National Education of Turkey, all educational institution of any level and type controlled by the Ministry will be obliged to have a Muslim prayer room 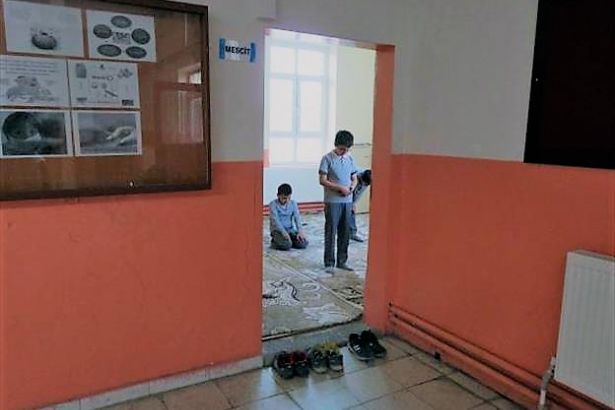 According to the new regulation of the Ministry of National Education of Turkey, all educational institution of any level and type controlled by the Ministry will be obliged to have separate Muslim prayer rooms for women and men, the latter being religiously required for the Islamic worship.

The regulation was published at the Official Gazette of Turkey on June 24, 2017.

The Labour Union of the Labourers of Education and Science (Eğitim-İş) has made a declaration stating that the new regulation of the Ministry is against ‘the Constitution, international agreements and the fundamental values of the Republic’. It is also stated that this regulation would allow the students to be blacklisted as those praying and not praying. The education union declared that it would resort to the jurisdiction.

The ruling Justice and Development Party (AKP) thus made another step for the Islamization process of the education system. The students in several public and private schools have been forced to go to the mosque through several projects of the AKP government.

The attacks of the government to secular education go hand in hand with those to scientific education. More recently the theory of evolution has been excluded from the most recent draft of Turkey’s new national curriculum.

Govt forcing children to go to mosque, blacklisting those not going

Theory of evolution completely eliminated from curriculum of Turkish schools