Normalization moves of Erdoğan: Whose call?

General Secretary of Communist Party of Turkey, Kemal Okuyan, was interviewed on Erdoğan's and AKP's moves before the upcoming local elections and how to interpret these moves referred as "normalization" 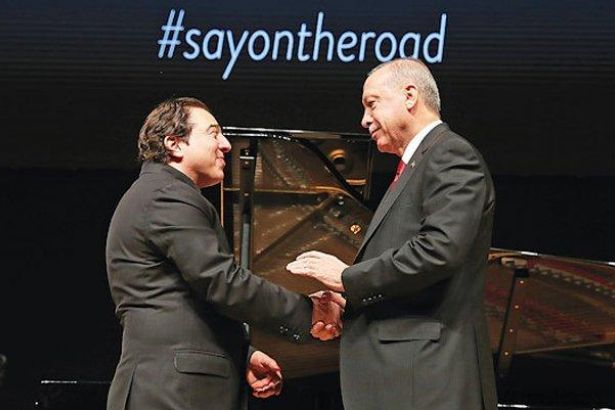 In this week’s interview Kemal Okuyan, General Secretary of Communist Party of Turkey (TKP), answered our questions regarding the moves of AKP government to “normalize” and the upcoming elections. The "normalization" discussion starts with one of the recent cases where the world-renowned pianist Fazıl Say invited Erdoğan to attend his concert after Erdoğan called the pianist over his mother's death.

A government critic, Fazıl Say, was prosecuted for Twitter posts that allegedly attacked Muslims and was acquitted by a Turkish court after four years. Say also accused Erdoğan of being behind the case against him. His invitation to Erdoğan, therefore, has been widely criticized in anti-government circles.

Okuyan also announced TKP’s slogan for the elections and commented on the perspective of TKP’s struggle regarding the elections.

Last week, President Erdoğan’s acceptance of Fazıl Say’s invitation and going to his concert hit the headlines. How do you evaluate this step and the subsequent discussion which happened shortly after Erdoğan described listening to Mozart as an atrocity? Is Turkey normalizing?

Due to the voids in the political area in Turkey, constantly heroes are being created among popular people. The bourgeois order wants this. It is hard to manage and control ideologies, collective organizations, political and social programs. On the other hand, it is easy to create heroes or mortify individuals. The same mechanisms work for both. This is why the cult of leadership is being created in politics. There are many people, who do not even understand the real source of the attention and popularity which arise around them. Fazıl Say became popular in such a world with his artistic creativity and his productivity. Even by defying the popular culture many times. At that point, he was burdened with an unearthly weight which he cannot carry. Fazıl Say’s close acquaintances always mentioned that the political meaning attributed to him was too much. Also, I believe that it is a myth that “art” can take up such a role by itself. Art contributes to social struggle as long as it is empowered by the political and social struggles. Neither did Turkey had such a healthy relationship between art and social struggles, nor did Fazıl Say, one of the most prestigious artists of Turkey, was a person who was open to such a relationship. Under these circumstances, it is not meaningful to ask “if Erdoğan or Fazıl Say took a step back?”

In here there is no struggle against persons; what is happening right now is a successful operation of a broad coalition who desires Turkey of AKP to normalize. Fazıl Say, as an artist, did not have a need to meet with Erdoğan, and it is true that this meeting provided a brief relief for Erdoğan’s legitimacy problem. However, the result is beyond Erdoğan himself and we shall not think that Erdoğan is keen about listening to Fazıl Say’s music.

In this framework, shall we consider the normalization as an “investment” for the period after the elections?

The election does not have a meaning by itself. AKP reached another consequence while trying to realize a Turkey Project which half of the society did not accept. The angry part of society has not yet realized this consequence. The most favorable legal-political-ideological ground for domestic and foreign capital is created. The risk of this ground is the non-temporary reaction of half of the society against AKP. They have been struggling for years in order to solve this issue. AKP, the establishment’s opposition, Gulenist network, CHP, other bourgeois parties, all of these actors have roles in this framework. For capitalists and the bourgeois order, Erdoğan is the leading actor for both risk and gains. Thus, Erdoğan is not managing the normalization process, he just cannot resist normalization demands after a certain point. As a politician Erdoğan does not have a style suitable with normalization, briefly, it does not work for Erdoğan. Because he sees an opposition ready to bow down and always finding ways to stay away from struggle, he calls the opposition to represent the anger in the society. Because he is aware that the opposition of the bourgeois order will not give the necessary struggle for the anger, it will abandon and disappoint the discomfort of the masses in the society and so Erdogan will get his revenge from the Gezi resistance which he never can forget. However another mindset which evaluates the situation from a perspective to protect the interests of the establishment instead of Erdogan’s personal motivations invests in normalization because it knows that a confrontation at this scale in Turkey may trigger unexpected developments which may harm the interests of the establishment. Of course, there are other factors such as developments in the world, competition within the imperialist system, regional developments etc. Turkey’s domestic politics are far from being suitable for engineering.

How would “normalization” affect the deepening economic crisis and possible social outcomes of the crisis?

I am especially emphasizing this point that, if AKP represents the claims and passions of the capitalist class in Turkey, CHP-İYİP (opposition bourgeois parties) represents the long term interests and mindset of the capitalist class. There is no contradiction in this, instead, there is consistency. And this consistency produces more exploitation, more injustice and more occupational homicides to Turkish society. Normalization means clearing Turkish society from any tensions which may harm this consistency and in this manner, Turkey shall not be normalized. In the narrow sense, the issue is not the acceptance of AKP. The strong social reaction which develops mainly in the framework of lifestyle, secularity, and freedom is the only positive energy left after the assault of capitalism which continues since September 12, 1980 (military coup). This energy shall not be eliminated. The only condition in order to maintain this energy is to direct this energy, at least some part of it, somewhere. This energy shall be directed to a pro-socialist tendency with labor character against the bourgeoisie. The rest is like a horror movie.

The clock is ticking on the elections. Candidates of the bourgeois parties have been declared in most cases. TKP started declaring its candidates in Dersim and other settlements. What will be the slogan of TKP in this election and on which direction will TKP work for this election?

Many years ago we stated “If the capital has tyranny, the people have TKP”, now we need to state this even stronger than ever. Because in the meantime both the tyranny of the capital (Money) and the Money of the tyranny have grown stronger. Now we have to strengthen the working people, and this cannot be done without the party. TKP will put all its intellect, organization, dedication and everything it has on the table. For the election and beyond. We are determining our candidates in every settlement of Turkey, we are communicating with people who want to join our struggle, with people who want to be our candidates in the elections. In Dersim, the candidates of a broader alliance will participate in the elections as candidates of TKP. Other than that we are determining our candidates and continuing our struggle at every settlement of Turkey. The principles of TKP are clear. We are against exploitation, imperialism, and bigotry. This is a very simple, but very assertive program. The forces of the people shall unite around this program.

Will TKP once again be blamed for dividing the votes?

The call for not dividing the votes in politicians’ mouths is nothing more than immorality. In the elections, there is no other party which argues the same principles with TKP against imperialism, exploitation, bigotry. Which votes will we divide? TKP is the real address of the people who are against exploitation, imperialism, bigotry and who still vote for the bourgeois parties. It is called an election for a reason. The people may vote for the right-wing government of the capitalists or for right-wing opposition of the capitalists. And the ones who desire may vote for the party of the working people.