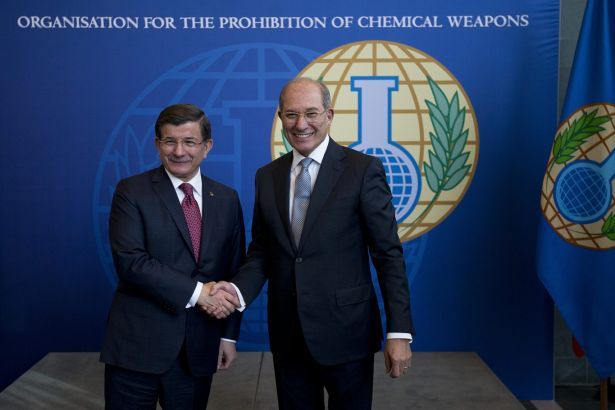 WikiLeaks issued an e-mail from the Organization for the Prohibition of Chemical Weapons (OPCW) dated April 7, 2018, which said the report on the use of chemical weapons in the Duma in Eastern Gouta, Syria, was deliberately distorted. The said report was signed by retired Ambassador Ahmet Üzümcü who was the head of the OPCW at the time.

Robert Fairweather and his deputy, Aamir Shouket were working under the Nobel Peace Prize holder Ahmet Üzümcü at the time and they received an e-mail on 22 June 2018. This e-mail reportedly said, the findings which contradicted the chemical weapons usage were not included in the report and the evidence was distorted.

The US, Britain, and France organized attacks on Syria after chemical weapons allegations and dozens of civilians lost their lives after these attacks. WikiLeaks asserts that the report was prepared and distorted under the pressure of the United States, to justify the operation in Syria. According to Mert Taşçılar's report on Odatv news portal, the process started by Üzümcü who was the General Director of the OPCW at the time, following the attacks in Eastern Gouta, whereupon he sent a delegation to the region to conduct investigations.

The report prepared as a result of these investigations, said remains of chemical attack were found. But after the report, an e-mail posted by WikiLeaks was sent. Although WikiLeaks hid the name of the sender of the e-mail, it is understood that the person who exposes the incident is one of the delegates to Syria. According to WikiLeaks, the footages about the attack and the treatment of civilians in the hospital to examine the symptoms of the first intervention on the news that everyone saw on all the news channels, was not consistent with what the witnesses told about that day.

A detailed account of this was clearly found to be removed from the revised version of the OPCW report. In the email, the situation was reported as: “Skipping this part of the report (including completely removed Epidemiology) has a serious negative impact on the report as it is inextricably linked to the identified substance. Consequently, chlorine or another suffocating substance may be questioned precisely because of the inconsistency of the reported and observed symptoms. The inconsistency was strongly supported not only by the OPCW team but also by three toxicologists with expertise in chemical warfare.”

In the e-mail, it was argued that the contradictions regarding such chemical weapons attacks, the extracted sections play an important role in assessing the difference between “the presence of toxic chemicals” and “the use of toxic chemicals”. The author of the e-mail concludes, by objecting to the administration, and asks to be allowed to include his observations in different documents. On the other hand, WikiLeaks' leak, right before the OPCW meeting in The Hague today was found conspicuously noteworthy.

In March, the Syrian Army found a workshop for the production of chemical ammunition in an area it had cleared from jihadists in East Gouta and announced the issue to the public. Russia in February publicly affirmed “a chemical attack provocation” was being fabricated. On the same days, France was on the preparatory side of this fabrication and firmly announced that they will retaliate if 'chemical weapons were used'. A month later the apparent provocation yielded the expected result and the French forces' strike blatantly started.