No to a military confrontation for interests of bourgeoisie and imperialist alliances: Communist Parties of Greece and Turkey

The Communist Parties of Greece and Turkey issued a joint statement, expressing their deep concern over the latest dangerous developments in the relations between the two states and denounce any action heading towards escalation and military conflict. 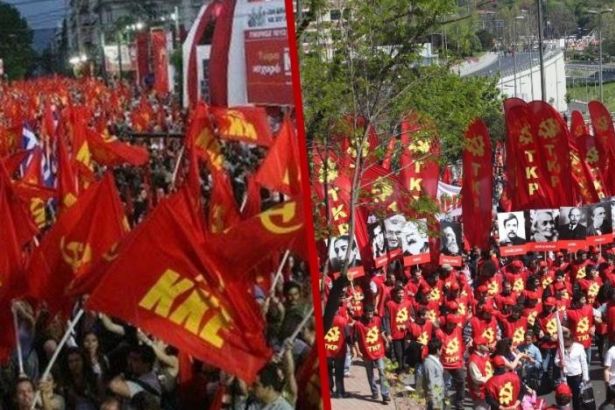 Communist Party of Greece (KKE) and Communist Party of Turkey (TKP) issued a joint statement and declared once again that the peoples of Turkey and Greece have an interest in demanding to live in peace and to struggle for their own future, against capitalist exploitation and capitalist profits that lead to tensions and even military conflicts.

The people of the two countries can and must claim their right to live in peace!

No to a military confrontation for the interests of the bourgeoisie and the imperialist alliances!

The Communist Parties of Greece and Turkey express their deep concern over the latest dangerous developments in the relations between the two states and denounce any action heading towards escalation and military conflict.

They note, among other things, that the decision of the Turkish leadership to proceed with the conversion of Hagia Sophia into a mosque moves in the direction of exploiting religious issues for fanaticism and the division of peoples, as well as constitutes an attack against the secular forces in Turkey. The two parties support that Hagia Sophia should remain a public museum, as one of the most well-preserved historical monuments of the world cultural heritage of mankind.

In addition, they believe that the escalation of the civil conflict in Libya, which was provoked by the imperialist intervention of NATO and is reinforced by the involvement of foreign forces and the pursuit of forming transnational agreements for maritime zones, violating the International Law of the Sea, so they can be used as an advantage in the Greek-Turkish dispute for the continental shelf and the EEZ, undermines even further the peace and security of the peoples.

The two CPs note that the relations between the two countries are further complicated by the competition between the bourgeois classes of Greece and Turkey to become a hub of energy and a transit center and their fierce struggle for the distribution of energy wealth in the region. It is part of the larger conflict between bourgeois classes, monopolies and imperialist alliances, which have already brought bloodshed to the peoples of Syria and Libya and now threaten the Persian Gulf. These conflicting interests have nothing to do with the interests of the peoples!

The situation is further aggravated by the two countries' participation in the imperialist organization of NATO, as well as their involvement in the dangerous pursuits of the USA and the EU. The peoples of Turkey and Greece cannot expect anything positive concerning the developments from the involvement of the powerful imperialist states, in fact, taking place in conditions where the international capitalist crisis and the tendency of power rearrangement between the most powerful capitalist states are intensifying.

We declare once again that the peoples of Turkey and Greece have nothing to divide them. They have an interest in demanding to live in peace and to struggle for their own future, against capitalist exploitation and capitalist profits that lead to tensions and even military conflicts. For the abolition of the exploitation of man by man and the satisfaction of contemporary popular needs, the eradication of those causes that lead the peoples to the "meat machine" of the imperialist war. The real guarantee of cooperation and fraternity between peoples, at the time when working people take the rule in both Greece and Turkey, will be the sincerity, solidarity, patriotic, internationalist and anti-imperialist stance of the communists in these two countries.

In this direction, the Communist Parties of Greece and Turkey, faithful to the principles of proletarian internationalism, will continue the struggle: