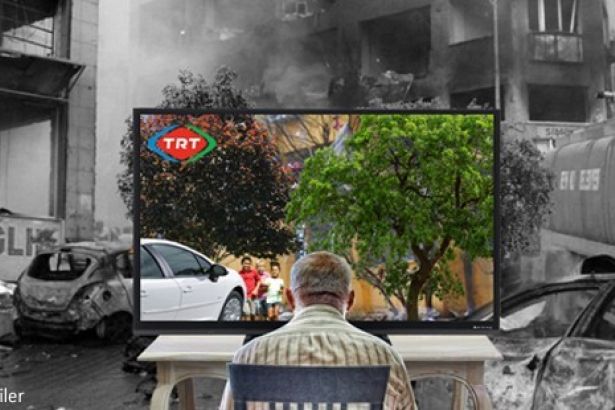 Formerly, it was possible for the TV channels to broadcast without the permission of the State by only making a commercial agreement with Türksat Satellite Communications and Cable TV Operations Company, the unique communications satellite operator in Turkey.

The new decree will render difficult both founding new TV channels and broadcast through Turkish satellites. The decree also violates the international agreements signed by the Republic of Turkey.

The Turkish government had already ordered the closure of 20 television and radio stations, including one that airs children’s programmes after the declared a state of emergency. With the decree, it becomes almost impossible for the opponents to broadcast the TV. Mainstream channels such as CNN Turk and NTV, which already broadcast pro-government, will also support the government more.

TAKEOVER OF MEDIA BY THE AKP

During the AKP’s first term in government between 2002-2007, several media companies became insolvent and were placed under the control of Savings Deposit and Insurance Fund of Turkey (TMSF), which is the main mechanism through which media groups changed hands under the AKP rule. TMSF seized the control of several prints and broadcast media and resold these media groups to pro-AKP businessmen.

During this term, then-Prime Minister Erdoğan had unprecedented support from the mainstream media, especially from the Doğan Group, which became an important beneficiary of AKP’s privatisations, including the Hilton İstanbul Bosphorus Hotel, which was owned by the Pension Fund of Turkey. The group took over Star TV the same year, in 2005, making the Doğan Group Turkey’s dominant media organisation.

In 2007, Sabah-ATV media group, which formerly belonged to Ciner Group, was acquired by Çalık Holding, whose media branch Turkuvaz Media Group. Another pro-AKP businessman, Ethem Sancak bought Star newspaper from TMSF. This newspaper was owned by Fettah Tamince, a close friend of Erdoğan, and Tevhit Karakaya, a former AKP deputy, until 2014.

During the second term of the AKP rule between 2007-2011, conflicts rose between AKP and the Doğan Group since Erdoğan had refused to grant the group permission to build a refinery for petrol in the southern town of Ceyhan, located at an important intersection between pipelines. Erdoğan handed the contract to the Çalık Holding.

During the third term of AKP rule between 2011-2015, media outlets continued to change hands through TMSF. Sky 360, the Çukurova Group’s television channel, and Akşam newspaper were sold to Ethem Sancak in 2013. Sancak sold the ATV-Sabah group to Kalyon Group, a major actor in the construction industry and a partner of the Cengiz-MAPA-Limak-Kolin-Kalyon consortium on the third bridge and the third airport of İstanbul.

The leaked tape scandal of then Prime Minister Erdoğan on December 17, 2013, revealed that he had intervened directly in broadcasts of Habertürk TV, owned by the Ciner Group. The most important leakage was the tape in which Erdoğan telephoned his son, Bilal, to instruct him to hide US $1 billion in cash. The tapes were leaked by the religious Gülen sect, which is also one of the forces behind the coup attempt of July 2016.

After the leakages, Erdoğan-Gülen sect conflict shaped the faith of the media institutions. Zaman, the prominent newspaper of the Gülen sect, was seized in March 2016, following the start of the fourth term of the AKP rule in November 2015. The newspaper stuck to the government line after the seizure and following the attempted coup d’état of July 2016, it was closed.