Kemal Okuyan, the General Secretary of the Communist Party of Turkey, in his article published in Morning Star, commented on the background to the despatch of Turkish troops to Libya and Turkey’s new claims to mineral resources in the eastern Mediterranean. 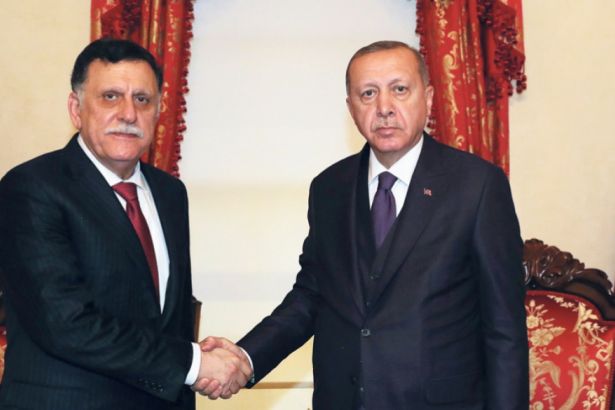 After failure in Syria, the Turkish President Recep Tayyip Erdogan is busy developing a second version of his neo-Ottoman project, which he first brought onto the political agenda in the second half of the early 2000s.

There is no doubt that the neo-Ottoman policy of territorial and economic expansionism is a product of the politics and ideology of Erdogan and his party.

The Republic of Turkey, founded following a bourgeois revolution under the leadership of Mustafa Kemal 100 years ago, was never truly accepted by the Islamist forces associated with Erdogan.

However, Turkey’s expansionist foreign policy over a wide region cannot be explained only by Islamist reflexes.

If it did not coincide with the needs of the capitalist class in Turkey, Erdogan’s neo-Ottomanism would be doomed to remain as a marginal tendency.

If we want to make sense out of foreign policy of Turkey, a country until very recently seen as a loyal ally of the US that only took initiative on issues that complied with Western imperialist centres, we first have to look at the developments within the imperialist system.

The US has long been having difficulties in sustaining its hegemonic role within the imperialist hierarchy.

One important outcome of this is the weakening of the system of alliances of which the US forms the centre. Today it is increasingly unmanageable.

The challenges that the US faces today are not simply the increasing economic influence of the People’s Republic of China or the growing political-military influence of Russia.

Countries seen as close allies of the US until very recently have started to use a larger range of action. Different political and military approaches within Nato have become visible.

All these developments are consistent with the logic of imperialism. Uneven development and the deepening of competition that eventually turns into conflict is not surprising in a world dominated by the monopolies.

As the imperialist system is shaken from the bottom up, all the actors take a part in the struggle to secure greater shares in proportion to their power.

It would be absurd to expect Turkish capitalism, which has now reached a significant level of development despite its fragile characteristics, to avoid this fight.

Besides, the Turkish bourgeoisie has realised that neither the US nor the European Union is able to offer them a stable growth alternative.

“Stability” is the last word that could describe what is happening these days in Washington, London, Paris and Berlin.

In this context it is makes no sense to claim that Turkey is moving away from Nato and settling in the Russia-China axis. Turkey’s ruling class has become more open to bargaining and takes a relatively unfettered and assertive position whenever the conditions are favourable.

However, as of now, it is out of the question that this process is leading Turkey to break off from the Nato alliance.

On the contrary, the Turkish bourgeoisie wants both to “remarry” the US and Germany under different conditions — but keep the broad freedom of action it has today. This approach is compatible with the reality of imperialism as of now.

For this reason we need ask how far the neo-Ottoman project can meet the ambitions of Turkish capitalism.

The Turkish economy under Erdogan’s AKP party has grown as a result of the lawless plunder of state-owned enterprises, cities, nature, rivers, mines, the freeing-up of space for international monopolies by the provision of all sorts of incentives, together with the destruction of the bargaining power of the working class and an irrational rate of borrowing.

Automotives and construction have become the main economic sectors. Many other industries collapsed. Agriculturally, Turkey is no longer a self-sustaining country. Food monopolies make great profits while small producers are tragically ruined. The economy, shaken by unemployment, foreign and domestic debt and high rates of inflation, has a fragile structure, especially in the finance sector.

For these reasons alone, just considering these economic criteria, one can see that Turkey’s neo-Ottomanism has serious limitations.

When we add that almost all important actors have their eyes on the region, that Turkey is not the most reputable country among Arab countries, that serious opposition exists within Turkey to neo-Ottomanism and that a part of the capitalist class wants Erdogan’s party, the AKP, to take a less risky foreign policy, it can be seen how hard it is for Erdogan to continue his assertive game.

Yet it should not be overlooked that Turkish capitalism has some advantages. In comparison with European countries, Turkey has a younger population.

Among them, those with secondary-school and university education constitute the most unorganised strata. With the loss of trade-union and collective rights, this reservoir of educated labour creates a huge competitive power for the capitalists.

Religious fundamentalism, used for controlling the masses in domestic politics, is also influential as a foreign-policy tool.

Lately Turkey has joined the struggle for hegemony between Iran and Saudi Arabia in the Islamic world. The initiative — developed by Erdogan together with Pakistan and Malaysia — should not be underestimated.

This trio of countries is influencing the Muslim population in Indonesia and India through economic, political and cultural channels.

Add Turkey’s presence in the Balkans, Caucasus and Somalia and the millions that it could direct via mosque organisations in Europe and especially Germany, and we can appreciate the scale of the network of influence within the Islamic world.

Turkey also has one of the largest armies in the region, allocates large amounts to its thriving defence industry and has become one of the few countries that have the capacity to organise military and intelligence operations abroad. Erdogan is not simply talking through his hat.

Erdogan’s foreign policy is flexible, pragmatic and opportunist, often changes by the day and is nowhere principled.

It is in the light of all these factors that Turkey’s decision to send troops to Libya should be analysed. Erdogan cannot afford a war that would shake his rule in a serious way. He does not have the necessary military and political resources.

Yet he is aware that, in the struggle for a share of energy resources in the eastern Mediterranean, he has to make new moves to raise his bargaining power.

For this reason, he has chosen to send some of the Islamist militants who are recruited from Syria, some intelligence officers and a limited number of special forces and military advisers to Libya.

His calculations in Libya are different from those in Syria. There Erdogan is seeking a permanent presence using the pretext of safety concerns created by the Kurdish presence.

When it comes to Syria, although it is true that dreams of five years ago have collapsed, Turkey still has an very wide range of action.

In Libya, on the other hand, Turkey is trying to hook into the struggle for a share in the eastern Mediterranean. As yet it does not have a strong position.

But whether Turkish capitalism adopts a more cautious or more aggressive foreign policy, it is a threat to all peoples in the region, starting with the working people of Turkey.

Just as in any other capitalist country, there is no “good exploitation.” For this reason, the revolutionary movement in Turkey bears the responsibility of transforming Turkey, a country now exercising a very large regional influence, into a country where equality and freedom prevails.