Jens Stoltenberg, General Secretary of NATO, stated that the S-400 issue was also brought to the agenda in his meeting with Turkish Foreign Minister Çavuşoğlu, and he would also discuss these issues with Erdoğan. 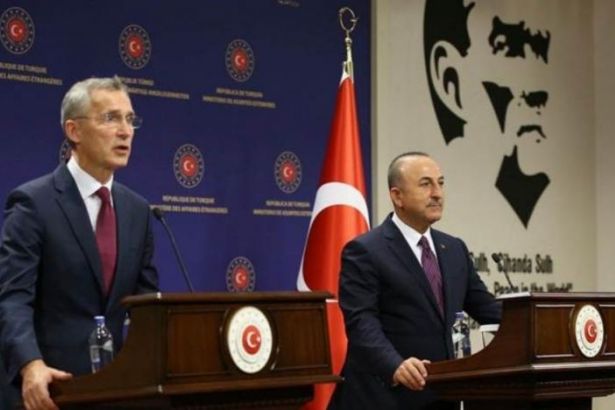 “Turkey is a valued NATO ally. Turkey has given much support to our common fight against the coronavirus pandemic. Turkey and NATO; theyalso contribute to each other on issues such as Afghanistan, Kosovo and Iraq.” Stoltenberg said.

"SECURE HOTLINE" BETWEEN GREECE AND TURKEY

"Today we are faced with some tensions in the Eastern Mediterranean," said Stoltenberg, regarding the negotiations between Turkey and Greece. “We created a secure hotline, which is active 24/7. I pay tribute to both allies for their efforts. It is my firm hope that the underlying disputes can now be discussed.”

Stoltenberg said that they are worried about the increasing attacks in Nagorno-Karabakh; "When we see the deaths of civilians, our concern increases, and the damage to energy resources is one of the sources of concern. We need to convey a very clear message to all parties: 'They must cease fighting immediately.' There is no military solution to the situation in Nagorno-Karabakh," he said.

Stoltenberg, “NATO remains strongly committed to Turkey’s security. Other allies are also planning to increase their support for Turkey. The security of Turkey is important for NATO,” he said.

ÇAVUŞOĞLU: IMPETUOUSLY WITHDRAWAL FROM AFGHANISTAN IS NOT RIGHT

At the joint press conference, Foreign Minister Mevlüt Çavuşoğlu made the following statements:

NATO has had an initiative in unbundling. There has been tension because Greece sent warships to our seismic research area. We have supported NATO's initiative. In the beginning, Greece had a negative attitude, but now we see that they also attend these meetings.

On the other hand, we have reviewed the support that NATO should give to Turkey. We see that the allies abstained this support from Turkey in Idlib with various reasons. In this sense, only Poland's support continued. We thank our ally Poland.

We do not think it is right to withdraw from Afghanistan in a hasty way. Iraq faces a variety of problems. Support is necessary to overcome these problems. We are in the coalition and also support NATO's mission there. We had the opportunity with the Secretary General to evaluate what we could do together. We also evaluated our efforts for a permanent ceasefire in Libya.

Today, some of our allies support the Kurdistan Workers' Party (PKK) and YPG organization. This is against the international law. We conveyed that this should be stopped.

Armenia, which has been stuck in the last days, has started to attack Ganja and even places close to Baku. They are clearly targeting civilians. This is essentially a war crime.

Azerbaijan is struggling to reclaim its occupied territories. Legally, everybody should support Azerbaijan. But all countries and international organizations are trying to act in balance. France of the Minsk trio openly supports Armenia.

No concrete proposal has been made regarding Karabakh and the occupied territories for nearly 30 years. When it comes to the territorial integrity of Ukraine and Georgia, we strongly support these countries. Why don't we call on Armenia to withdraw from Azerbaijan? Otherwise, this problem cannot be solved. Everyone should stand by the righteous.

Azerbaijan does not have a request for support at the moment, but we said we would give it if it happens.