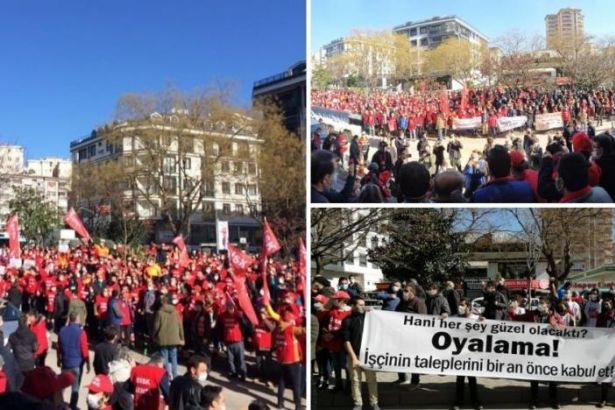 Cleaning Works, Parks and Gardens, Veterinary Affairs and Support Services workers who are members of DİSK Genel-İş Union, working for Maltepe Municipality were again in front of the municipality building today in order to get the rights they demanded through collective bargaining. The workers, organized through the committees they established in their workplaces, decided to go on strike on February 23 due to the uncompromising attitude of the employers' union during the collective bargaining negotiations that have been going on since September 2020.

The workers who gathered nearby came to the front of the Maltepe Municipality building after a short walk. During the enthusiastic crowd march and the statement made in front of the municipality, "Victory will be the resisting workers' ", "Collective contract is our right, we'll try our hardest to get it!” and "Maltepe don't sleep, stand by your worker!" were the shouted slogans. TKP Maltepe District Organization members and friends who participated in the protests in order to stand behind the struggle of the municipal workers and to encourage the people of Maltepe for stronger support for the resisting workers with the slogans "The municipal worker is not alone" and "No bowing, no submission, uphold your labor".

In the 7-month collective bargaining agreement talks, DİSK Genel-İş represents approximately 1600 municipal workers, and the Social Democratic Public Employers Union (SODEMSEN) represents the employer side. In the negotiations of the collective bargaining agreement consisting of 90 articles, 1 provisional article, and 2 annexes, only one-third of the 90 items have been settled so far. The employers' union did not agree to any of the 26 articles under the heading "Wages and Social Aids" in the text of the collective labor agreement.

In this collective bargaining period, in order to compensate for the wage loss they have suffered since 2017, the workers asked for a 40 percent raise for the first year, but the employer side offered a wage increase of 6 percent and then 7 percent for the first year of the collective agreement.

Municipal workers, who are covered by collective bargaining agreements, currently earn on average 10 percent to 15 percent above the minimum wage. In December 2017, if these workers, were not transferred from subcontracting to payroll employment without equal rights with other public workers by the Decree-Law No. 696, with a rough calculation, they would have been paid almost twice the wage they are currently receiving.

Another important point of disagreement in the talks is the weekly working time. Workers demand a weekly working time of 40 hours at most and not exceeding 8 hours a day, divided equally into 5 working days of the week. On the employer side, while insisting that the weekly working time should be at least 45 hours, they press on additional work such as weekend breaks, overtime, night work and drag their feet on the wages to be applied to these extras.

Other issues of conflict are, the job layout and working arrangements of the workers in the workplace, worker health and safety, and the composition and the constitution of the disciplinary committees.

WORKERS HAD TO STRUGGLE AGAINST THE MAIN OPPOSITION CHP MUNICIPALITIES

In this period, unlike the previous periods, the Social Democratic Union of Public Employers (SODEMSEN) represents the employers' side in the collective bargaining negotiations. SODEMSEN is an employer union where Izmir Metropolitan Municipality Mayor Tunç Soyer is the director of the board of directorates, all of whose members are CHP municipalities. The mayors of Karşıyaka, Muratpaşa, Ardahan, Odunpazarı, Edirne, Kadıköy, Yenişehir and IZFAŞ General Manager are in the Board of Directors.

In his own words, SODEMSEN stands, “to protect the rights and interests of its members arising from the legislation and collective bargaining agreements, to regulate the work and working conditions of the members in a way that will increase productivity, to act as a facilitator in the collective bargaining agreements signed by the members, to work together between the employers, the workers and the Workers' Unions. It aims to identify disputes and maintain work peace and represent its members within the framework of the legislation.

The collective bargaining negotiations which lasted 7 months point out the fact that, during the two collective bargaining periods, municipal workers, in order to make progress, had to struggle against a united force of CHP Municipalities gathered at the same front, instead of dealing with bosses one by one. CHP seems to think, united power will provide a stronger stance against workers.