Municipal workers in Istanbul take action for their rights

Workers in two separate municipalities ruled by the main opposition party CHP have started to resist against the non-implementation of the collective agreement and layoffs. TKP supports the struggle and actions of the municipal workers 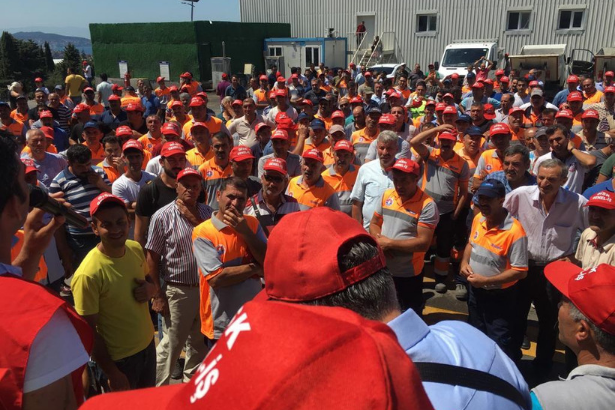 Workers working in the municipalities of Maltepe and Ataşehir districts of Istanbul, where Public Services Employees Union of Turkey (Genel-İş) affiliated to the Confederation of Progressive Trade Unions of Turkey (DİSK) are organized against low wages, non-implementation of collective bargaining and dismissals.

From the beginning of the resistance, the Communist Party of Turkey (TKP) has supported the struggles and actions initiated by the workers. The communists also responded with a statement to the anti-working class discourses of the mayors and bourgeois politicians, who tried to pacify the struggle of the workers.

The resistance of the workers of Istanbul's Ataşehir Municipality started when a former subcontractor worker who worked in the municipality burned himself in front of the town hall and was seriously injured.

In the months that followed, the municipality's attacks on unionized workers increased. In October, workers organized under Genel-İş made a one-day strike action, demanding regular payment of wages and reinstatement of workers dismissed because they were unionized.

During the same period, two DİSK member workers were dismissed for trade union activities without justification. Once again in November, a one-day strike was held, demanding the return of the dismissed workers, the implementation of the collective bargaining agreement and to receive salaries regularly. During their resistance, the union's expert was beaten by 15 security guards.

Although a collective labor agreement was signed in November 2018 between Genel-İş and the Maltepe Municipality, the municipality did not implement this agreement in the last one year.

As a result of the dismissal of the leading workers in the union, the municipal workers halted work on October 25. Workers faced police violence on the first day of the quitting action, which started with the demands of workers to be reinstated and to implement the collective bargaining contract. The resistance of the workers was marked with the slogan "the union of workers will defeat the mayors”.

As a result of the negotiations, the resistance, which was terminated on November 2, resulted in partial improvement in working conditions and an agreement was reached with the municipality on the reemployment of dismissed workers. As a result of the signed protocol, workers started to work.

'THIS IS NOT ABOUT POPULISM BUT BEING ANTI-LABOR'

While the problems in the municipalities continue, Maltepe Mayor Ali Kılıç visited the CHP leader Kemal Kılıçdaroğlu with a delegation. During this visit, Kılıçdaroğlu said that “we now have workers who are overcharged by our mayors. All right, brother, take your wages but you say you're going to strike. They want to move us back to the ‘garbage mountains' that Erdoğan has said so often. I will certainly not allow this to happen".

This statement of the CHP leader sparked reaction among the municipal workers who continued to struggle because of the low wages and poor working conditions.

Making a statement on the subject, the Communist Party of Turkey (TKP) noted that the statement of Kılıçdaroğlu is not different than what is expected from Tayyip Erdoğan or another reactionary party's leader. "Kılıçdaroğlu sees the world from the perspective of capitalists. In this order, where the lawlessness towards the workers arises, every politician putting the blame on the workers is working for the interests of the capitalists," TKP stated.

“The policymakers of CHP are free to choose which class to serve. They can choose the capitalists if they want to. And they do so in most cases... But we do not give them the freedom to say that 'this is about populism' because this is about being anti-labor," TKP added.