Istanbul Provincial Director of Turkey’s Ministry of National Education attended the publicity meeting organized by the Ensar Foundation known for its systematic child abuse scandal in 2016. 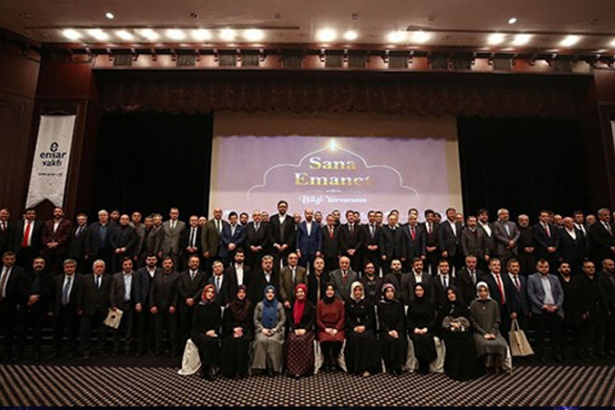 Turkey’s Minister of National Education, which has signed many protocols with the pro-government Ensar Foundation despite the judicial decisions, attended the publicity meeting of an Islamic knowledge contest organized by the foundation notorious for the systematic rape of children at one of its dormitories 4 years ago.

Speaking at the publicity meeting of the Islamic knowledge contest, called ‘‘Sana Emanet’’, to be organized in cooperation with the Ensar Foundation and the Ministry of National Education (MEB), Levent Yazıcı told that the contest covers not only Islamic imam hatip secondary schools, but all public and private secondary schools as a whole.

Yazıcı, sharing the statistics regarding the Ensar Foundation’s contest, claimed that it will be carried out entirely based on voluntariness and will be held in 732 schools in 25 districts.

"We are trying to reach 787,000 students through this contest. We will make our national, indigenous and common values felt to all of our children," he stated.

Underlining that the activities carried out by the Ensar Foundation and another Islamist Foundation for Dissemination of Science (İlim Yayma Foundation) are not limited to imam hatip schools, Turkish President’s son Bilal Erdoğan said that a series of "comprehensive projects" have been carried out for all schools in the country.

As the ruling Justice and Development Party (AKP) continuously promotes Islamization in social, political and educational spheres in the country, Erdoğan family-linked Islamic foundations are subsidized by the Turkish government.

In 2016, 45 children had been raped by a teacher working at Ensar Foundation, which provides Islamic education, scholarships, and accommodation for children across Turkey. Despite the scandalous child abuse incidents, the AKP government continuously backs and further encourages infamous Islamic institutions such as the Ensar Foundation in the country.

When it became apparent that dozens of children were systemically raped at a dormitory of the Ensar Foundation, then-Minister of Family and Social Policies, Sema Ramazanoğlu, had said, "One-time occurrence of such a situation should not be used to discredit Ensar’s contributions to society." Moreover, one of the chairpersons of the foundation was appointed as a judge by the Turkish government after the child abuse incidents.

The Ensar Foundation had also made a call for jihad with the end goal being the establishment of an Islamic state in textbooks that it handed out to children in religious imam hatip high schools in Turkey’s capital, Ankara.

With these huge supports to state-backed foundations pouring money into schools that teach Islamic values, the government is aimed at raising "pious generations" to serve its own Islamist ideology for the consolidation of the new regime established by the AKP rule.