While the minimum wage discussions continue in the Turkish Parliament, the representatives of the AKP government make statements arguing there is no poverty in Turkey. 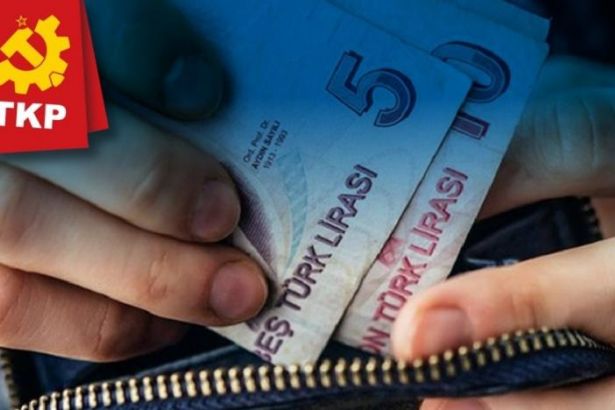 While the meetings are ongoing to determine the minimum wage in 2021, Zehra Zümrüt Selçuk, Turkey’s Minister of Family, Labour and Social Services, stated that “the poverty is no longer a problem in Turkey”. Replying to the critique that "the people can only eat dry bread now", AKP deputy Şahin Tin said, "then they are not hungry".

On the other hand, the results of the hunger and poverty threshold study of the research center of United Metalworkers’ Union show otherwise. The minimum wage in Turkey is currently 2324 TL (~296$), which is one of the lowest minimum wages in Europe.

With the expenses such as education, health, accommodation, entertainment, heating and, transportation, the amount of expenditure that a family has to spend in a month is 8437 TL (~1076$).

According to the study, the minimum wage for the worker whose spouse is not working and has two children receives 2435 TL (~310$). This wage is not even one-third of the amount that is required for living. Considering the expenditures, the minimum wage is only enough for 8 days in a month.

"STRUGGLE FOR A HUMANE LIFE"

TKP emphasized that Turkey’s ruling AKP uses the cheap labor in Turkey to attract domestic and foreign capital to the country and called on workers to struggle for a humane life.

Workers will not be conned with the minimum wage.

Struggle for a humane life!

The minimum wage for 2021 will be determined. By whom?

By the Minister of Family, Labour and Social Services, who said “the poverty is no longer a problem”, by the representative of the bosses and by the head of the collaborator labor confederation. There will not be good news in the minimum wage for the workers from these people.

Altogether, they are making the calculations to give workers so little that they can take back much more in return. They will continue to give away much more to the bosses than the small increase in the minimum wage. Meanwhile, capital groups are watching the polite fiction expectantly.

However, more importantly, the minimum wage in our country has been using for years to lower the general level of wages. Average wages are getting closer to the minimum wage.

The incentive system, which is put into effect to fill the bosses’ pockets, encouraging the bosses to employ workers with minimum wage.

Cheap labor is still the biggest trump card in the government’s calls for investment in domestic and foreign capital.

On the other hand, the minimum wage does not have the function of determining the minimum level of wages in our country.

During the pandemic, millions of workers were forced to live on an income far below the minimum wage, as they were sent on unpaid leave and bosses benefit from the short-time working allowance.

The widespread use of flexible and part-time work also caused wages to fall below the minimum wage for some workers.

Unregistered workers have been earning less than the minimum wage for years and trying to survive under challenging conditions.

Not only the unemployed but also the working or not considered unemployed, the large masses are faced with the problem of hunger. The poverty line has exceeded 8 thousand TL (over 1000$).

Given these facts, it is embarrassing that the opposition proposes figures that do not reach half of the poverty threshold for the minimum wage. Altogether, they have played a role in turning the minimum wage discussions into polite fiction.

The struggle cannot be for the minimum!

TKP calls on those who live with their labor to struggle for a country where everyone can live humanely, where everyone has the right to work, and where the most basic rights such as education, health, and housing are provided free of charge and equally.