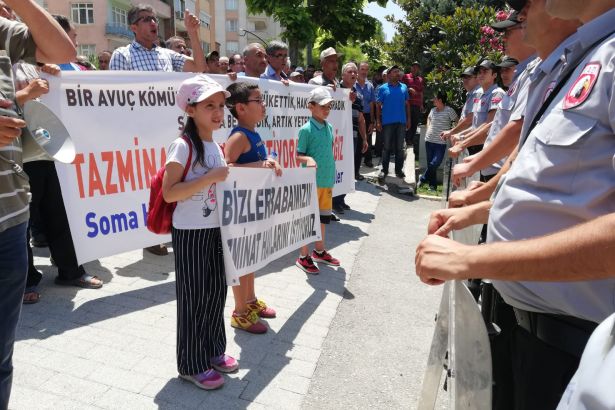 Approximately 4,000 mine workers, including 2,831 workers laid off following the massacre of 301 miners on 13 May 2014 in Turkey's Soma, have been struggling for compensation for years.

Workers of Uyar Mining and Soma Kömürleri, Inc. have been waiting for their severance pay and others rights to be given after their termination of work 5 years ago. Workers filed suits individually and collectively; some of the cases were rejected and in some of the cases that went for an appeal, the Supreme Court decided the workers to be paid compensation.

The class-action lawsuit also resulted in favor of the workers. However, no worker has ever been paid compensation.

The workers started organizing protests to get their compensation. On July 10, about 100 workers gathered in the square in Soma District Governor, marching to Turkey Coal Enterprises (TKI) with the demand to get their severance pay and other rights.

Workers were stopped by dozens of private security guards and police at the gate of TKI. After making a press statement in front of the building, miners submitted a petition to the TKI administration.

Tahir Çetin, Chairman of the newly founded trade union, Bağımsız Maden-İş, in Soma, told soL news that it should be TKI that will solve this problem. According to Çetin, they submitted the first petition to TKI and stated to them if they do not solve the problems in a month, they would organize a second marching protest on 21 August.

"If the problems are not solved until September 13, we will march to Ankara," the trade unionist added.

On May 13, 2014, Turkey had witnessed one of the worst occupational murders incidents in its history. More than 700 miners were trapped in one of the pits of the Soma mine, which is a private lignite mine in country's western province of Manisa. 301 workers were killed and more than 160 other people came out of the mine with injuries.