Sol news interviewed with the retired miner İsmail Çolak, Head of the Soma 301 Social Solidarity Association, whose 27-year-old son was among the mineworkers who lost their lives in Turkey’s deadliest mine disaster in Soma district on May 13, 2014 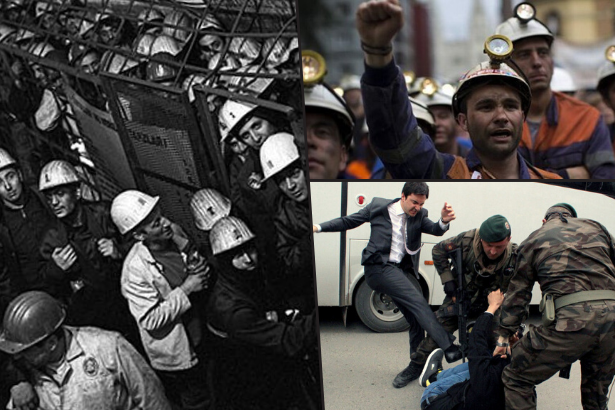 Today is the World Miners’ Day of December 4.

At least 1693 mineworkers lost their lives since 2002 under the Justice and Development Party (AKP) government, while 66 workers were killed in 2018 due to occupational homicides in mines, according to a report released by the Health and Safety Labor Watch (İSİG) on the World Miners’ Day.

THE SOMA MASSACRE IN TURKEY

In Turkey, the word ‘‘mine’’ has reminded people of the Soma massacre since May 13, 2014. 301 workers lost their lives in the Soma disaster in the country’s western province of Manisa, which was recorded as the deadliest massacre of workers in the history of the Republic of Turkey.

The massacre, which has left the families of hundreds of lamented mineworkers to the legal struggle that would last for years, not only revealed how the capitalists are protected by the bourgeois political power but was also extremely important to understand how the capitalist class recklessly exploits the workers.

Then the Turkish Prime Minister Recep Tayyip Erdoğan had stated after the massacre that ‘‘These kinds of accidents are ordinary and recurrent things in mines…Death is the fate of this profession’’, while he slapped the citizens protesting him during a visit in the wake of the mine disaster in Soma, the site of the coal mine explosion in Manisa.

Yusuf Yerkel, one of then-Turkish Prime Minister Recep Tayyip Erdoğan’s advisers, was also photographed while kicking a miner’s relative, Erdal Kocabıyık, who was being held by the members of Turkish Special Forces. Kocabıyık, battered by Erdoğan’s adviser, first was fined 500 Turkish liras for ‘‘damaging the prime minister’s car’’, and then received a 10-month jail sentence.

The bosses of the Soma Mining Inc., who are the main responsible for the massacre, have been put under the protection of the ruling AKP.

As Alp Gürkan, one of the CEOs of the Soma Mining Inc., was acquitted together with other 36 defendants, Can Gürkan, the former CEO of the Soma mine arrested after the massacre and sentenced to 15 years in prison, was released by a Turkish court last April.

‘THE DAY OF SORROW FOR FAMILIES OF MINEWORKERS’

Despite the five years since the disaster, there has been nothing new for the miners and their families after the Soma massacre.

As a retired mineworker who lost his son, Uğur Çolak, in the massacre, İsmail Çolak told that ‘‘I retired from that mining company, but my son and his 300 colleagues were killed there. This massacre happened due to the collaborative policies of the capitalist class and the political power.’’ 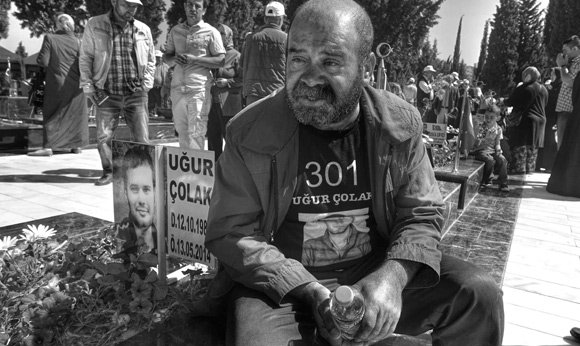 ‘NOTHING’S CHANGED AFTER THE MASSACRE’

Stating that nothing has changed after the massacre, especially in the mines, Çolak said, ‘‘The authorities still do not take necessary measures regarding occupational health and safety. Negligence still continues…Inspections are not regularly carried out.’’

‘‘As for the families, December 4 is the day of sorrow for us, for those who lost their children and relatives in the mine disasters. We bitterly celebrate the World Miners’ Day, but what do they want us to celebrate? Our children lost their lives. The lives of families and miners in Soma have not changed,’’ İsmail Çolak continued.

‘POLITICAL POWER SOLD THE MINE TO ITS HENCHMEN’

Telling that he was also a mineworker working in the mines for more than 20 years and retired from the mine where the Soma massacre happened, Çolak noted, ‘‘That mine was previously working under the state-owned Turkish Coal Enterprises Institution until 2006. They sold it in that year; actually the political power sold the mine to its henchmen by privatizing it. And the mine has become the tomb of hundreds of workers…’’

‘MASSACRE WAS A RESULT OF A SERIES OF SERIOUS OMISSIONS’

‘‘We think the relevant authorities responsible for the mine did not fulfill their fundamental duties. This massacre was a result of a series of serious omissions,’’ İsmail Çolak said.

Stating that the disaster in Soma could have been prevented by taking very simple measures but the bosses did not choose to take necessary steps due to their ambition to make production and profit, Çolak also underlined, ‘‘This massacre is the deadliest massacre of workers in the last centuries. This was not destiny, not fate. What happened there was a massacre.’’

‘‘We did not forget that the adviser of then-Turkish Prime Minister kicked the miner’s relative. We’ll never forget, it still lingers strongly in our memories.’’

‘‘We have never forgotten Taner Yıldız, then-Turkish Minister of Energy, who promised to bring those responsible for the massacre to justice, then-prime minister and other ministers…We will never forget them,’’ İsmail Çolak concluded.

On May 13, 2014, Turkey had witnessed one of the worst occupational mass murders in its history. More than 700 miners had been trapped in one of the pits of the Soma mine, which had been a private lignite mine in the country’s western province of Manisa. More than 160 other people came out of the mine with injuries while 301 workers were killed brutally.

It is known that Soma Mining Inc. has driven great profits from its strong ties to the ruling AKP. Entering the mining sector during the privatization policies of the 1990s, the company became more powerful during the AKP government due to the legalization of the ‘‘royalty’’ system based on renting in return for a coal share.

The massacre, which triggered mass protests, showed the AKP government was so close to industry bosses and was insensitive after the then Prime Minister Recep Tayyip Erdogan said the disaster was part of the profession’s ‘‘destiny’’.

Approximately 4000 mineworkers, including 2831 workers laid off following the massacre of 301 miners in 2014 in Soma, have been struggling for compensation for years.