Workers who worked at the factory of OYAK Renault, a car-manufacturing company in Turkey, have been sentenced to imprisonment for protesting the company directorate and yellow union for violating their right to unionise in 2016 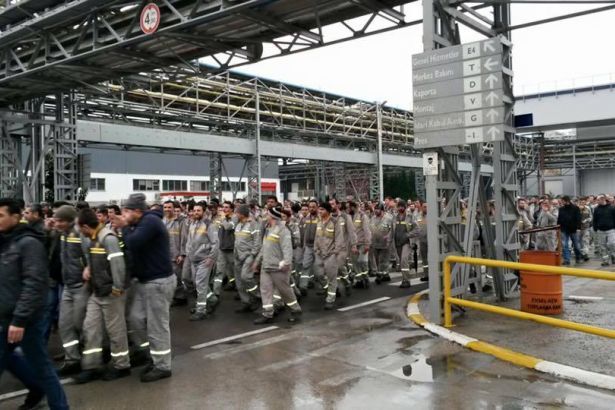 In the case where OYAK Renault, a car-manufacturing company in Turkey’s Bursa city, had sued workers who protested the company for violating their rights for unionising in 2016, the court sentenced the workers to imprisonment for 5 months.

In 2016, workers at OYAK Renault’s factory in Bursa had started to leave Türk Metal, a yellow union, and join with the United Metalworkers’ Union (Birleşik Metal-İş), operating under the roof of the Confederation of Progressive Trade Unions (DİSK). When all of the workers in the factory joined with Birleşik Metal-İş, the union announced that there would be an election for “workplace representatives” on February 29, 2016, in order to have the right to representation.

The company fired 10 workers on February 29, among whom there were also spokespeople of the union. Police attacked the workers who protested the discharges, and 21 workers were taken into custody. The number of the workers fired afterwards reached 140 in only a few days. It was also revealed that employees from various levels in the company, along with members of Türk Metal, attempted to intimidate and threaten workers to leave Birleşik Metal-İş and join with Türk Metal. The company had filed a lawsuit for the workers, and the court ruled for a 5-month imprisonment on November 9, 2018, delaying to pass the sentence, for participating in unlawful assembly and demonstration march.

Birleşik Metal-İş issued a press release on the matter, emphasising that, in all of the reinstatement claims filed by their members, it was settled that the OYAK Renault directorate had fired the workers for unionising and prevented workers from exercising their rights to unionise.

Highlighting that the verdict was clearly against the law, the statement read: “Though it has been established that preventing those who wish to make a press release was a violation of right in the hundreds of decisions made by both the Supreme Court and the European Court of Human Rights, the Court of First Instance in Bursa has chosen to disregard those decisions.”

Noting that the court’s decision also delivered the message that says “the employer can fire you, oppress you, or force you to quit the union if you are unionised in a trade union at your own will, and we will sentence you to imprisonment if you protest and seek your rights”, the statement maintained: “While the law-enforcement officers and the law have to protect the right to unionise, one of the basic elements of individual rights and freedoms, there is no legitimate explanation of them preventing it by going against the law.”