Metal workers, refusing to submit to a 3-year validity period for their contract and a 6.4% wage increase imposed by capitalist plunderers, have set February 2 as the date they will begin a strike 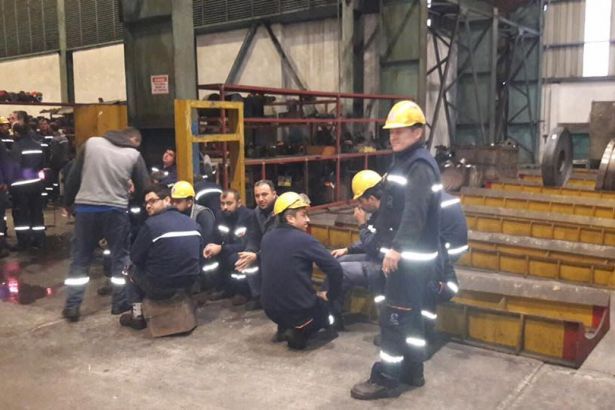 Metal workers are determined to not to submit to oppression in the hands of the capitalist plunderers of the metal industry. Workers affiliated to the United Metal Workers’ Union (Birleşik Metal-İŞ) went on a 1-hour token strike in certain factories on January 23, and strike notices have been put up in a number of other factories.

Metal workers, rejecting Turkey's pro-capitalist Metal Industrialists Union (MESS)’s unacceptable offer that includes a 3-year validity period for its contract and a 6.4% wage increase, have decided to go on strike on February 2, 2018.

8000 metal workers participated in token strikes in 30 factories on January 23.

Using Turkey’s military operation on Syria’s Afrin as a pretext, the Turkish Metal Union, a trade union that has been collaborating with capitalists, announced that they have decided to stop all workers’ protests in city centres until February 2.

According to a report prepared by the United Metal Workers’ Union, metal workers in Turkey work in much worse conditions compared to European metal workers. The report indicates that the average hour-cost of a metal worker for a capitalist is 33 euros in Europe, while this amount is only 2.58 euros in Turkey.

The profits of capitalists in the metal industry have also increased with the rise of total production in automotive industry. The report shows that according to the data of the Organization for Economic Cooperation and Development (OECD) Turkish metal workers only take 3.2 days off a year for medical reasons. This figure is 27.6 days in Mexico. Yet, the pro-capitalist ‘trade union’ MESS insisted that bonuses should be given out based on actual work, falsely claiming that the abstention rate of Turkish metal workers is excessively high and that they receive ‘unnecessary’ medical reports.

Turkey has the lowest labour costs among European countries. The average hour-cost of a metal worker for a capitalist is 59 euros in Norway, 38.8 euros in Germany, 36 euros in the Netherlands, 4.2 euros in Bulgaria, and only 2.5 euros in Turkey.