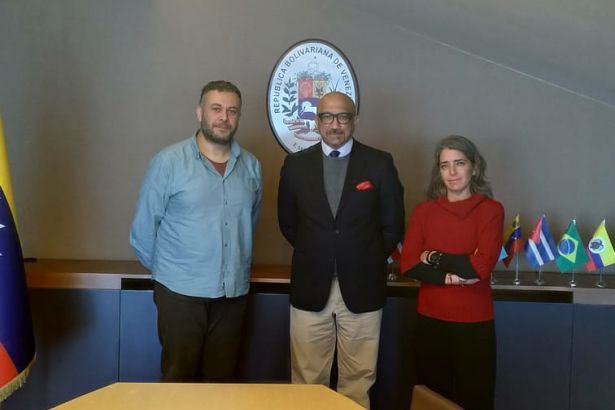 Last week, Venezuelan President Nicolas Maduro issued an open letter to the US people in order to start a resistance against the military threats of the US and the countries of the region and to start solidarity with the people of Venezuela.

Nicolas Maduro stated that he had signed the letter for the sovereignty and independence of the country, and expressed his hope that tens of millions of Venezuelans would sign this letter calling for "hands off Venezuela".

For the campaign for which the Venezuelan people have formed long lines to sign, Bolivarian Republic of Venezuela Embassy in Turkey also held a signature collection day on February 11, inviting various political parties, associations, and organizations.

In solidarity with the Venezuelan people and to give the message "hands off Venezuela" to the United States and other allied countries, TKP International Relations Bureau and José Martí Cuba-Turkey Friendship Association representatives signed the letter in Ankara and İstanbul. The signature campaign continues in the branches of the José Martí Cuba-Turkey Friendship Association.

The letter opened for support in various countries of the world reads "We are living today in a historical crossroad. There are days that will define the future of our countries, giving us a choice between war and peace. Your national representatives of Washington want to bring to their borders the same hatred that they sowed in Vietnam. They want to invade and intervene in Venezuela — they say, as they said then — in the name of democracy and freedom. But this is false. Their history of the usurpation of power in Venezuela is as false as the weapons of mass destruction in Iraq. It is a false argument, but it can have dramatic consequences for our entire region."

Maduro's letter open to the people of the world and calling the people of the United States to respect his country's sovereignty ends with this call: "We appeal to the good soul of U.S. society, a victim of its own leaders, to join our call for peace. Let us be all one people against warmongering and war."