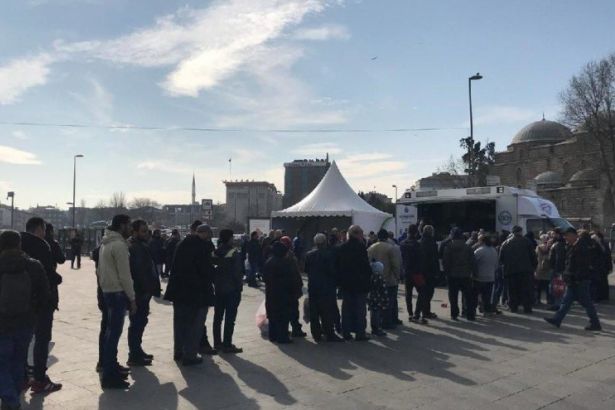 Under the government initiative, municipalities are selling vegetables at around 50 percent of prices recorded by the Turkish Statistical Institute in January. A maximum of three kilos of goods per person is allowed. Citizens waiting in long lines to buy a limited quantity of certain vegetables complain about the quotas.

Turkey is battling with high inflation with a 31 percent annual increase in food prices. The price of eggplants, cucumbers, and tomatoes have jumped 81 percent, 53 percent, and 39 percent, respectively, over the past year.

People waiting in long lines realize that this is an election investment for the AKP government and raise their concerns. Deniz Yerlikaya from Birgun Daily reports interviews with citizens waiting in Istanbul sale points.

“There were gas queues in the past, now there are vegetable queues. What changed? I don’t understand” says a citizen and adds that “market prices should go down; we can’t always wait in long queues”.

“I think this is wrong, they do it for local elections,” another citizen complains.

President Erdogan blames the alleged hoarders and traitors for storing staple goods in warehouses to skyrocket prices and “terrorize society”. Price hikes in foodstuff is a result of economic crisis and AKP policies that harmed food security. Turkey over 17 years of the AKP’s rule has gone from being a significant exporter of livestock to a net importer. It is now the biggest importer of meat and live animals in Europe.

According to Turkish Statistical Institute data, the production of almost every staple grain, pulse and vegetable decreased significantly. Since the AKP came to power, institutions that had played a crucial role in the agriculture sector have either been shut down or privatized.

AKP government presents a cheap sale of vegetables and fruits as their invention to protect the public. However, the sale of foodstuff directly by municipalities has a history in Turkey that goes back to 1970s. Direct sale shops were set up to fight with high inflation for the first time in 1973. The aim of these shops was to purchase basic needs of the public directly from the producers or cooperatives, eliminating retailers and therefore curbing the price hikes.

Tansa, the first direct sale shop was opened by Gultepe municipality in Izmir. Similar shops were opened in Istanbul in 1976 and became widespread. These shops were closed or privatized for economic reasons in the 1990s.