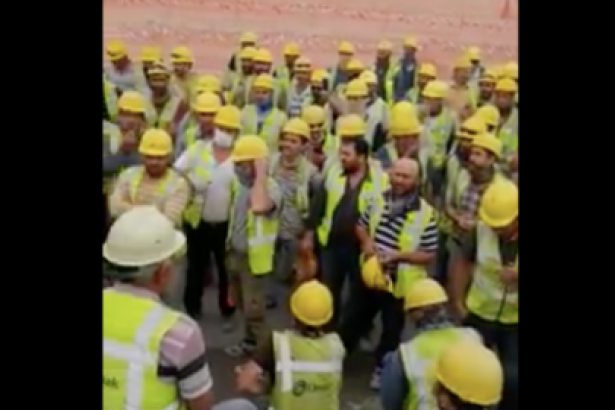 Yesterday the workers of Kuwait Airport Construction done by pro-government compony Limak met with company executives after they were forced to leave without pay and layoffs. During the meeting, a company foreman slapped a worker demanding his rights.

After this incident, approximately 500 workers initiated a demonstration for their colleague who has been subject to violence.
The workers explaining the process they have been through to workers solidarity network, PE (We breathe down the bosses' neck) stated that 1500 ironworkers have always mentioned their hesitation regarding the pandemic in the construction yard, but no one had paid attention to their concerns.

“They told us that anyone can quit the job if they do not want to work. Today, after the workers requested their rights from the company executive, a foreman has slapped one of our friends. We have initiated demonstrations after this incident. We will also initiate a demonstration for our rights and all of the workers tomorrow morning” the workers stated.

Workers forced to bad working conditions and mandatory leave without pay mentioned that they will not leave the construction yard until the rights of all of the workers are paid.

Limak Holding is a Turkey-based conglomerate, part of a joint that won the contract to construct the controversial Third Airport in Istanbul. During the construction of the airport, tens of workers died in occupational murders.