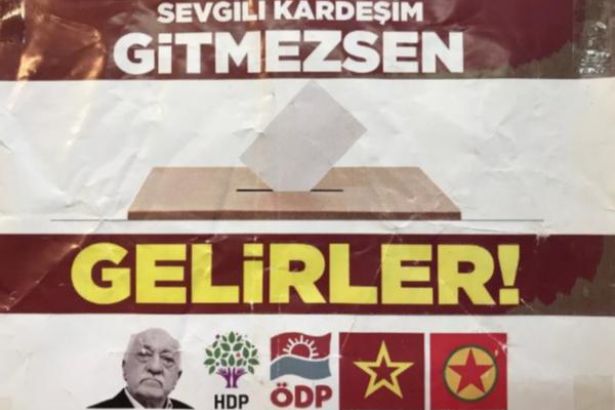 The leaflets, undersigned by “Beyoğlu Patriotic Initiative”, used some logos including the CHP Beyoğlu candidate Alper Taş's party, the Freedom and Solidarity Party (ÖDP), the Kurdistan Workers’ Party (PKK), the Syria-based Kurdish People’s Protection Units (YPG), the CHP party, the İyi (Good) Party and a picture of Fethullah Gülen, targeting all of them.

“Dear brother, if you don’t go, they’ll come,” the leaflet says, calling on the citizens to go to the polls so as to prevent the targeted ones from winning the local election in Beyoğlu.

The people who realized the leaflets near the election polls criticized this unlawful propaganda, saying that it would be impossible to relate left-leaning Alper Taş with the US-based Islamic cleric Fethullah Gülen’s network.

Alper Taş, one of the leaders of Turkey’s left-leaning Freedom and Solidarity Party, is running as the CHP mayoral candidate in İstanbul’s central district of Beyoğlu, where the CHP and İyi Party support Taş as the common candidate of the Nation’s Alliance.