Thousands of Turkish lawyers across the country gathered to protest the ruling Justice and Development Party’s new draft law that aims to decentralize and subdue the bar associations. 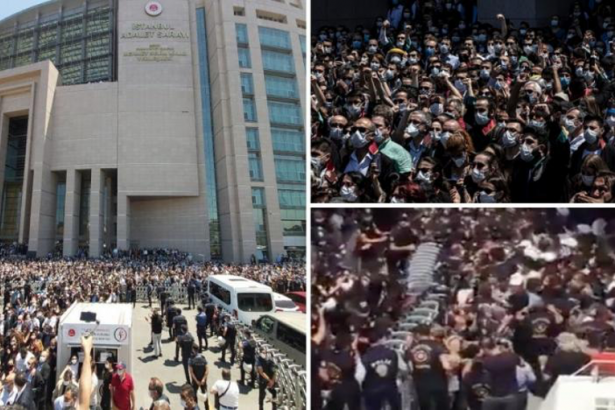 Turkish lawyers gathered in front of Istanbul’s Çağlayan Courthouse on June 30 to protest against the recent draft law submitted by President Recep Tayyip Erdoğan’s ruling Justice and Development Party (AKP). Turkish government aims to divide and silence the dissident bar associations with its new plan presented to the parliament on Tuesday.

The draft law allows the establishment of alternative bar associations in İstanbul, the capital Ankara, and the western province of İzmir, representing almost half of all lawyers in the country, while it seeks to amend the electoral system of the executive board of the Union of Turkish Bar Associations to weaken the three major associations so that pro-government associations in provincial level would have more influence in the decision-making process regarding the lawyers’ agenda.

Addressing the lawyers in front of the Çağlayan Courthouse during the protests, Mehmet Durakoğlu, Head of the İstanbul Bar Association, said, ‘‘They [government authorities] accuse us of doing politics. Can you tell me a country where doing politics is a crime? They want lawyers to refrain from talking about politics, but we’ll be engaged in politics until we die.’’

‘‘Some of the lawyers are on a death fast. Lawyers are resisting because they will lose their professions, not their lives. They want a fair trial,’’ Durakoğlu continued, reminding Ebru Timtik and Aytaç Ünsal, the two arrested lawyers from the Progressive Lawyers Association (ÇHD) who have gone on a death fast for a fair trial.

In addition to İstanbul, lawyers in southern province Adana and southeastern province of Gaziantep were also in protest for their right to defense against the Turkish government’s draft law that would decentralize the bar associations.

Lawyers continued their protests in front of the former Adana Courthouse despite the police attack in the Defense Rally in Adana.

In Gaziantep, lawyers also gathered in Democracy Square and protested the AKP government’s recent attack on the bar associations, emphasizing the bars won’t be silenced.

Kerami Gürbüz, the Head of Samsun Bar Association, resigned from his post to protest the Turkish government’s draft law attempting to change the electoral system and the structure of the bar associations.

THE DRAFT LAW PRESENTED TO THE PARLIAMENT BY THE AKP

As thousands of lawyers protested the Turkish government’s plan to decentralize and silence the dissident bar associations, the ruling AKP submitted the controversial draft law to the parliament on June 30.

Claiming that it is not democratic to determine the executive board of bar associations with 20 per cent of the votes, AKP lawmaker Cahit Özkan told reporters that the bill was needed because bar associations were no longer able to function properly following a 13-fold increase in the number of lawyers in Turkey since the existing law first came into effect.

Under the recent draft law presented by the AKP government, each bar association will be represented by 3 delegates and 1 chairman in the Union of Turkish Bar Associations.

‘‘For the bars that have more than 5,000 members, we are bringing a regulation that at least 2,000 lawyers can form the second, the third or the fourth bar by coming together,’’ Özkan also noted.

Protesting the government’s draft law that will pave the way for the establishment of alternative bar associations in three major cities of Turkey, presidents of 30 bars have announced that they will organize a ‘‘Grand Defense Rally’’ in Ankara, the capital city of Turkey, on July 3, 2020.

Lawyers have been invited to ‘‘the Grand Defense Rally’’ to be held in Ankara on July 3 at 2 p.m. in the statement.