Kemal Okuyan writes: Opinions on the next day of Turkey's referendum 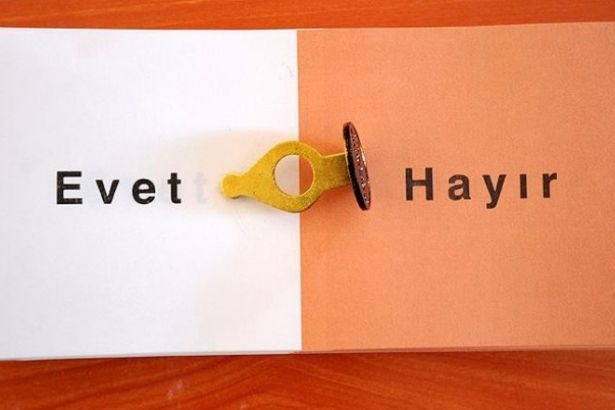 A presidential referendum ballot with the options "Yes" and "No".
  

First Secretary of the CC of Communist Party of Turkey (TKP), soL columnist, Kemal Okuyan wrote an article on April 13, 2017, on the stance of the communists in Turkey in the run-up to the referendum that will be held on April 16:

An early article in advance of April 17

Normally, it might be necessary to write this article on April 17.

However, we will have many other things to talk about right after the referendum in our country, where no one can describe what the normal stands for. There will be many things we will need to talk and do…

What I note here may disturb some people; some may question why I resort to some definite judgements or why I express extremely harsh criticisms towards some certain groups in the absence of evident results just two days before the polls.

Let’s note that the result is not certain yet, and we do not have any opinion poll company.

Everyone should spend the last two days on raising the number of ‘no’ votes, particularly putting pressure on those who are reluctant to vote for ‘no’ despite they tend to do so. It is too late and difficult to acquire ‘no’ votes from the base of AKP [the ruling Justice and Development Party]. That base has been consolidated.

Despite Erdoğan [Turkish President Recep Tayyip Erdoğan] has played a role in it, he has not done it by himself. It is necessary to congratulate Kılıçdaroğlu [chair of the main opposition Republican People’s Party-CHP Kemal Kılıçdaroğlu] for showing a great respect towards Erdoğan during the [referendum] campaign, to whom he said, “You can remain in office”, for imitating whatever AKP has done, for competing with [PM] Binali Yıldırım for making the hand sign of the Grey Wolves*, for dictating the members of CHP to pronounce the ruling party as “AK Party” as Erdoğan prefers, and for preventing his party’s supporters from taking a tough stance. He has, therefore, led some AKP supporters, who are confused about their preferences, to think, “So, we are not that bad”.

However, Kılıçdaroğlu is not alone, either… Those who have been trying to create a deep strategy for months with saying, “A trap is set for Erdoğan, too”, have also made a great contribution to Erdoğan. While Erdoğan says, “Everyone is against me”, those who claim to oppose him say: “A trap has been set for you”.

According to this account, Erdoğan’s fans would say ‘no’, though regretfully, so as to save Erdoğan from his greed. The referendum may result in a prevalence of ‘no’, yet be sure that no one will vote with such a mindset: “The Chief ** is in a difficult situation, hence I shall save him from the traps”. Just the opposite seems true…

No agreement has been settled for a long time in deciding by whom the trap was set. First, the name of Bahçeli [chair of the Nationalist Movement Party-MHP] came to the fore. In any case, he would do the same thing; he would jeopardise his party again. So much so that, some say, he has entrapped Erdoğan in accordance with the mission he was undertaken.

I would understand if this allegation came from the supporters of AKP, yet I could not comprehend if those who are in favour of the ‘no’ side deduced an argument from here for the campaign!

After then, some started to imply that the trap was framed by the great powers of the world. Erdoğan was rushing to his own fate due to his ambition for the Presidency. Then they addressed the supporters of AKP: “Fellows, your leader has been deceived dreadfully. Thus, come and say ‘no’, and save him!”

We need to open a parenthesis at this point. At this moment, no actor in the world is able to play such a game. You will understand what we mean if you just look at the top four countries. Do you think that the US, Germany, China, and Russia can act in pursuance of long-termed strategies? They doubtlessly have deep accounts and long-termed plans in their inventories; yet, now they are trying to control the chaos into which the world has slid. The system of alliances has collapsed, even these four countries have drifted into unambiguity in defining which power is an enemy and which power is an ally, Putin has fallen out with Trump over whom he thought he had total control until ten days ago, and a swift, though unreal, détente has emerged between the Chinese leaders and Trump…

We always say that the imperialist system is in a crisis. There can be no such trap as “stimulating Erdoğan for the presidential system”. If such a trap existed, it would hung in the air, and boomerang the holders of the plan in question.

The issue is not that much complicated. The crisis of imperialism also has a bit part in saving Erdoğan. The fact that such an unprincipled and unpredictable leader holds an electoral base is quite important in such a world in which everyone wobbles around. Anyhow, everyone, great powers think that they can still benefit from Erdoğan…

Let’s close the parenthesis and return to our issue.

Why does not Erdoğan’s electoral support diminish?

It does not because the life is not only composed of elections.

The ‘no’ choice may prevail. Under normal circumstances, however, the ‘no’ choice should have won by far since the Constitution draft of this referendum seems nonsense, so does what is taking place during the referendum campaign… A country with a population of 80 million should have stopped this absurdity in a much more influential way.

Nevertheless, even describing it as absurdity has been almost banned.

The AKP regime has been quite legitimised during the referendum process, so has been the Presidency of Erdoğan.

The psychological superiority of the AKP’s dissidents has been eliminated, even leading them to doubt about themselves. Their excitement has been suppressed.

Some invented the “propaganda free of tensions”. They have allowed Erdoğan to control the tensions. Furthermore, large masses have been imposed by an opinion that tensions are something bad. A propaganda affiche of a leftist group that claims to be a revolutionary party reads: “One-man regime stands for polarisation”.

Should one understand vandalising around when it comes to polarisation or tension?

The propaganda free of tensions has eliminated the energy of the ‘no’ front. However, one should consolidate his/her side at first before attempting to narrow the opposite side. Unconfident masses, which think that the opposite side might be right, too, could not wage an influential struggle. The only common characteristic of the ‘no’ front has been reactions against Erdoğan. Hence, it became apparent from the very beginning that this reaction has been wrong and useless.

Appearing as useful at the very beginning, this attitude has eventually paved the way for ignorance, vulgarity, shamelessness and insolence. The Turkish society has been persuaded once again that evilness becomes legitimate and popular; in a way free of tensions!

The majority of those who will not go to the polls tends to the ‘no’ choice! Then, where does this reluctance stem from?

I want to brief the situation. As I have said, no matter what happens or what result comes, we will have to endeavour hard following April 17.

We will spend the remaining time on persuading the people to go to the polls, and then we will roll up our sleeves. Keeping in mind that: indeed, there is nothing as the “no front”. We say and will say ‘no’ with different reasons. If the ‘no’ choice wins, then we will gain strength all together; yet, the differences will not decrease. Or if the ‘yes’ choice prevails, then some will lose whereas some others will continue to struggle even more assertively under harder conditions.

*Okuyan recalls that Kılıçdaroğlu made the famous political hand sign of the Grey Wolves, an ultra nationalist youth organisation affiliated with the Nationalist Movement Party (MHP), with the aim of showing sympathy towards the neo-fascist voters.

***Okuyan plays on words here, referring to a homonym in the Turkish language. The word, “hayır”, means ‘no’ and/or ‘good’ in Turkish.