"This game won’t last forever, of course. Erdoğan can’t manage the big fight within the system. But he may do this: until the last moment, saying ‘you’re all guilty,’ he can light into Israel one day, to Germany the next day, to the U.S. afterwards, and tear into Putin if necessary, and he can turn out to be right in all of them" 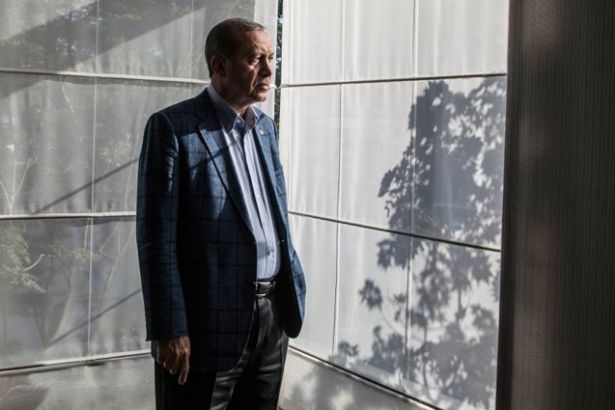 Kemal Okuyan, General Secretary of the Communist Party of Turkey and soL columnist, wrote on the Turkish president Recep Tayyip Erdoğan and his political intentions, and his role and fate in the world imperialist system.

Erdoğan is a person who can say "this is black" showing a white piece of paper, and declare traitors the people treating the same piece of paper as black the next day, and glower the day after saying "heyyy so-and-so, you tried to sling mud at this white paper, mud!"

Zarrab was a hero yesterday, is a spy today. [1]

Capitalism was bad yesterday, and today "thank god, we don’t deviate an inch from capitalism."

He was a strategic partner with the U.S. yesterday; he is fighting against it today.

He used to destroy the families of those sniping at Fethullah yesterday, and today, all extended family of Fethullah... [2]

He used to clobber those saying "the snotty imam;" today, he is ridiculing "the sluggish imam."

The definitions of friend and foe are like the legislations of the country – nobody can chase them; they’re as what the gentleman says – besides, "who did erect these skyscrapers here?" [3] Isn’t that so!

Tomorrow, he may say about Melih Gökçek, who he deemed proper for residents of Ankara for many years, “they assigned to the administration of our capital a person who undertook a mission to disincline the people from us; we gave this game away too,” and on top of it, he may even ban t-shirts that have pictures of dinosaurs. [4]

Without a doubt, this is a talent.

And this talent of Erdoğan is not a gift of god. He was endowed with this talent by the god of the market.

In 15 years, he has proven that a country can be ruled without being subject to any rules. Laws are not of the slightest importance to him; he challenges the rules of physics – what's maths to him!

Freedom is a nice thing; just imagine that you don't give a damn about any restrictions.

But how has it happened? How has Erdoğan gained such a wide realm of freedom while millions are prisoned in the whole country?

It's happened thus: Erdoğan offered a ruleless country to "domestic" and foreign capitalists as saying “don’t tie my hands and I will prosper you; plunder, exploit, and pillage the country as you wish.”

Public enterprises were handed over to the private sector for peanuts without any legal obstacles.

Forests, rivers, seacoasts, and mines – everything belowground and aboveground has become the playground of the capital. Without being covered up, because there was no more any cover whatsoever.

Worker wages were repressed; working time was extended; going on strike was practically precluded. Theft of labour has reached a limitless freedom.

People were motivated for indebtedness; the domestic market was blown up with credits; futures of people were taken hostage.

Money, sources of which were unknown, entered the national economy; from Africa to the Balkans, from Caucasia to the Middle East, all sorts of trick were played.

Our capitalists had gotten used to the lawlessness; they earned a fortune. In the meantime, they have been resenting Erdoğan taking credit for lawlessness and obtaining power and financial opportunities out of the corner of their eye, and have been making attempts to find a more "moderate" alternative.

However, Erdoğan was a ruleless "rule-maker." He knew well how to show a big stick to big holdings, which want the rulelessness to be valid only for them and Erdoğan to behave a little bit ruefully, by saying "nothing doing, I brought the paradise under your feet; you can't get rid of me."

The market economy had involved in crime from head to toe, so much so that, knowing the market economy itself is the crime, even we were thunderstruck at the size of the dirt littered around.

Reza, who confessed "I'm a piece of dirt," shows in the trial in the U.S. the dirt of senior politicians and bureaucrats in Turkey; the chief of those politicians and bureaucrats apostatizes and threatens to say "we are all in the same boat; we plied this trade all together." [1] There are no workers, no labourers, poor peasants, unemployed, retirees, nor people’s intellectuals in that boat. There are the actors of the market in that drifting boat; from its politicians to its bosses, from its bosses to its bureaucrats and everywhere is covered with dirt.

They will sell out the weak ones when they find the opportunity and will be acquitted by wiping their dirty hands onto the ones they discredited. But for now, everyone guarantees themselves hanging tight on one another; in the meantime, they continue making money shoving down the people's throat.

Here, at the very moment, the issue gradually becomes more and more international.

This is because Erdoğan attempted to extend his unlawfulness to the foreign policy. Imperialist countries enjoyed this quite a lot at the beginning. How on earth didn’t they – they would get rid of all that got in their way a little and in addition, they would open new doors in the Arabic geography with the Erdoğan key.

However, in the imperialist system, the law of the jungle is in effect, not unlawfulness. The law of the jungle is a system in which everyone behaves unlawfully in proportion to their power. For example, the topmost U.S said “first, my actions don’t depend on a rule; second, my right to teach their place to those not obeying the rules is set up can’t be restricted” after the Soviet Union had dissolved and seek to behave as such. After a while, other states which flout the rules within the country or in a limited region attempted to resist this unlawfulness and wanted to restrict the freedom of the U.S. for their market actors to receive a larger share.

Erdoğan’s ruleless actions in the international area have coincided with the very time when this fight escalated. Everyone settling scores with the ones they can afford... When Russia showed Erdoğan that he can’t move in Syria as he wishes, he said "NATO, save me;" when the NATO officials warned "don’t bite off more than you can chew," he hugged Putin saying "my dear friend."

This game won't last forever, of course. Erdoğan can't manage the big fight within the system. But he may do this: until the last moment, saying "you’re all guilty," he can light into Israel one day, to Germany the next day, to the U.S. afterwards, and tear into Putin if necessary, and he can turn out to be right in all of them.

This is because our boat which is covered with dirt has been dreadfully polluted in the international waters in which it drifts by the sewage spilling out of the market economy.

And it is quite interesting that Kılıçdaroğlu, who calls out "we shall behave lawfully," addresses businessmen and the west world. [5]

A lawful and fair capitalism... It must be a joke!

The world under the hegemony of money has only one rule: Exploitation!

No, no, we aren’t in the same boat whatsoever; let that boat sink, or even better, let the people sink it.

[2] Fethullah Gülen, the U.S.-based Islamic preacher, one of the masterminds of July 2016 failed coup attempt, once an explicit and respected supporter of Erdoğan, now deemed a terrorist along with his network under the assigned name FETÖ/PDY.

[3] Referring to the skyscrapers disfiguring the silhouette of the historical peninsula of the city of İstanbul, for which Erdoğan gave his personal approval but later criticised the contractors for the visual pollution.

[4] Melih Gökçek, former mayor of Ankara, recently forced to resign by command of Erdoğan, infamous for controversial monuments erected in Ankara, such as a dinosaur monument, which was removed after his resignation. Referring to the banning of t-shirts with the word “hero” written on them in Turkey in relation to the post-coup trials.