Kemal Okuyan: 'This country has no choice but struggle'

soL News interviewed with Kemal Okuyan, First Secretary of the CC of the Communist Party of Turkey, on the dubious referendum results and the political situation in Turkey. Okuyan argues that indeed the 'no' side has won 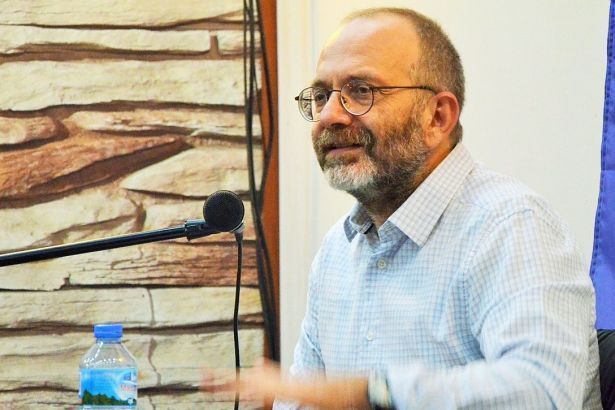 As harsh debates continue over the dubious results of Turkey’s constitutional referendum, soL News interviewed with Kemal Okuyan, First Secretary of the CC of the Communist Party of Turkey (TKP).

Stating his first observations regarding the referendum results, Okuyan said: “We cannot talk about any arithmetical result. They have done what they are good at they have stolen the results. Yet logic and wisdom show that the ‘no’ choice prevailed arithmetically, too. Still, some other results came. First, we saw what they could do; the picture is apparent in spite of extreme oppression, frauds, and exploitation of governmental facilities. We can say that the rate of the supporters of this political power is indeed around 40 percent of Turkey. More importantly, the resistance in metropolises has increased. Such cities as Adana, Mersin, Diyarbakır, Antalya, Denizli, Aydın, Eskişehir should be taken into consideration along with İstanbul, Ankara and İzmir. They cannot shift the Constitution in such a picture.”

Talking about the electoral frauds, Okuyan stated: “Utilisation of entire governmental facilities for the ‘yes’ campaign is a fraud, is not it? Are not media lies a fraud? The threats, the terrorization, are not they fraud? They limited the number of the political parties eligible to participate in elections in order to decrease the number of polling observers, is not this fraud? Moreover, the frauds during the referendum day: missing ballots, unsealed ballots, some images showing ‘yes’ voters voting out of the polling stations, unlawful interventions of the police and gendarme, the cases of multiple voting, and finally High Electoral Council’s decision to approve the unsealed ballot…"

Responding the question what to do against the frauds, Okuyan said: “The people should react. However, we witness a CHP [main opposition Republican People’s Party], which blocks the people’s reactions, which the people still have faith in. [President] Erdoğan should once again thank Kılıçdaroğlu [chair of CHP]. CHP cannot do anything. The base of CHP gets its hopes up all the time, yet CHP appeases the rage and energy of the people each time.”

CAPITALISTS PAVED THE WAY FOR A STRENGTHENED EXECUTIVE POWER

Okuyan argued that there were some personalities from the CHP administration, who wished before the referendum to see a narrow margin in favour of the ‘yes’ choice: “Kılıçdaroğlu has not been ready for a prevailing ‘no’ result. The government would not concede a result in favour of the ‘no’ choice. Kılıçdaroğlu did not do anything but calling for ‘consensus’ during the whole referendum campaign process. Secondly and most importantly, we should note that these results are in favour of the big capital and the majority of international monopolies. The leading [local] capitalists have paved the way for the presidential system for many years.”

Okuyan continued: “We also know that imperialist centres pushed for a system with strengthened executive powers. Their concern is Erdoğan’s extremities and self-ordained style. A narrow margin of the ‘no’ choice would tie Erdoğan’s hands, activating a ‘program’ that allows a vast space of manoeuvre for capital. They have accomplished what they desired. That has been the mission of Kılıçdaroğlu for many years.”

In answer to whether the referendum results lead to a relaxation, Okuyan put forth: “No way. Intra-imperialist antagonisms have reached a critical point, and Turkey is located amid one of such crucial points. Erdoğan extends his political life taking the advantage of these contradictions on the one hand, and the contradictions in question further undermine Erdoğan’s road on the other hand. No stability can emerge at this point. Nor Turkey’s internal dynamics can produce stability. Turkey cannot carry the burden of Erdoğan in cultural, ideological, political and economical aspects… Turkey’s working people cannot withstand Erdoğan and his mindset, either.”

Kemal Okuyan argued that the status quo has shifted within the established politics, and continued: “There are serious problems within AKP. The referendum results have come as expected in İzmir, but we witness a government that has also lost Ankara and İstanbul. If the results came further narrow, Erdoğan would immediately have to take the chair of AKP. CHP is troubled all the time. And now Akşener has come to the fore within the established politics [Okuyan refers to Akşener and other leading figures from the Nationalist Movement Party (MHP). While this party ‘officially’ supported Erdoğan’s ‘yes’ campaign, many figures like Akşener carried out a ‘no’ campaign against Erdoğan and MHP administration.] They have acquired the authority to represent MHP. They will distress AKP as Erdoğan and his party get into trouble. They will also attract the dissidents from the base of CHP. We already know that there have been preparations for building a new ‘centre’. Another party in the parliament, HDP [pro-Kurdish Peoples’ Democratic Party] has largely consolidated its base despite all the repression.”

Talking about the stance of the Communist Party of Turkey (TKP), which announced before the referendum “to continue to struggle no matter what results come”, Okuyan stated: “TKP said so because if the ‘no’ choice had prevailed, it would have been an important success with positive consequences, yet it would not have stood for a solution alone. There was no such level of organisation to protect the ‘no’ votes. We know that more than a half of the voters in Turkey voted for ‘no’. However, the ruling power has stolen that results and the reaction against the thefts has become so weak considering the number of all ‘no’ voters. We said, ‘if the ‘yes’ choice won, it would not be the end of the world’. Have we ended up with the end of the world? Shall we leave? No Way! TKP calls on the people to strengthen the organised struggle.”

THE LESSON: ‘YOU ARE NOTHING IF YOU ARE UNORGANISED’

Kemal Okuyan indicated to the crisis of imperialism: “Imperialism is in a great crisis. The capitalist establishment in Turkey is on the verge of a heavy economic crisis. Lack of organisation would be fatal in such a period. We insist on our call. The people should be organised in Turkey.”

Putting forth his views on how to transform the people who voted for ‘no’ during the referendum, Okuyan said: “We have left the referendum behind. The results are no legitimate. Yet the people should focus on the realities of life. The society is unorganised at factories, offices, schools and neighbourhoods. Therefore, they cannot protect their votes. A considerable part of the people who said ‘no’ is composed of labourers. They should start understanding the fact that the capitalist class undermined secularism in Turkey, and what we call imperialism is the order of monopolies.”

Responding the question whether the communists should address only the ‘no’ supporters, Okuyan said: “Primarily, yes. That is also the way of reaching the labourers within the base of AKP. If the ‘no’ side loses its energy and confidence, then nothing can be accomplished in this country. There is only one way to fill the ‘no’ side with energy and identity: giving the colour of the working class, which is not a mathematical but a political operation. If one-tenth of the ‘no’ voters reach such an organised stance, then everything will change in Turkey. And nobody will be able to steal it! Neither the ruling party, nor [the state-run] Anadolu Agency, nor the High Electoral Council (YSK)!

In answer to the question whether such organisation is possible in the near future, Okuyan said: “There is no other alternative in this country. TKP will do its best. Socialism is an urgent need. The conditions are appropriate for organising. The conception of Republic also needs socialism. Turkey cannot withstand Erdoğan while capitalism cannot withstand the Republic.”

Okuyan concluded: “Many people worked for the ‘no’ votes with sincerity and self-devotion. They are the honour of the country. No one should lament as if everything were in vain. A very important lesson was taken yesterday: you are nothing if you are unorganised.”