Şule Çet, a young woman in Turkey’s capital city Ankara, was drugged, raped, and killed in last year’s May. Murder suspects Çağatay Aksu and Berk Akand appeared in the second trial on May 15, many gathered in front of the courthouse demanding justice 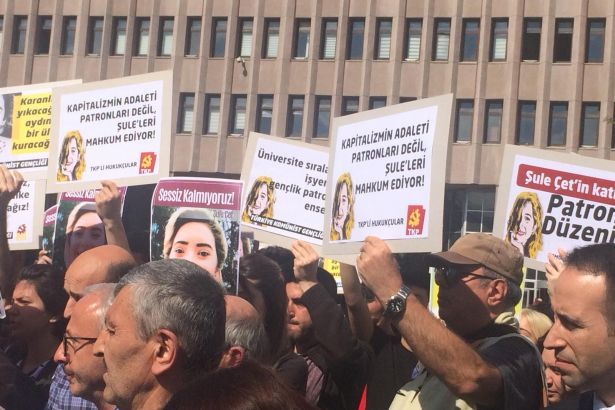 On May 28, 2018, Şule Çet, a 23-year-old woman student-worker, was killed after thrown off from her boss' office, which was on the 20th floor of a tall business center in the capital city of Turkey, Ankara.

The second hearing of the case was held on Wednesday, May 15, in Ankara.

Various political parties, associations, foundations and platform representatives gathered in front of the courthouse in Ankara and reiterated their demands for justice for Şule Çet.

“We are here to interrogate the justice of the legal system which released Şule Çet’s murder suspects, her bosses, several times before finally arresting them. They did not question why Şule Çet had to work in order to study in the university, but questioned if her father was sending money to her… We will establish a country where there is no violence or inequality! Young people in our country will not have to work to get an education!”

Prior to the hearing, the lawyer of the accused Çağatay Aksu claimed that Şule Çet’s father did not send money to his daughter and asked for the examination of the bank accounts. Moreover, the suspects and their lawyers claimed that she committed suicide because her grades were not good.

During the hearing, Çet family’s lawyer stated “They say that Şule killed herself because her father did not send money. Who commits suicide because their father doesn’t send them money?”

Before the trial ended, Aksu stated: “Şule’s family and boyfriend should be sitting here instead of me.”