July 15 coup attempt in Turkey: What was it about?

Celebrations were organized by the ruling AKP and opposition parties for the third anniversary of the July 15 failed coup attempt in Turkey, while the Communist Party of Turkey (TKP) continues reminding what the coup attempt was actually about 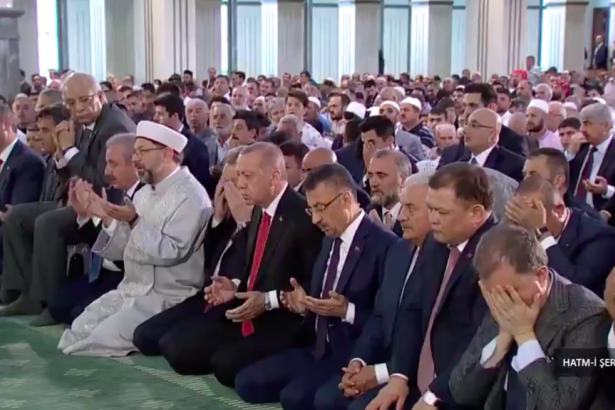 President Tayyip Erdoğan participated in the commemoration ceremony for July 15 failed coup attempt held for the first time this year at the Palace. Erdoğan left a wreath at the "Monument to the Martyrs" in front of the Palace, and later joined the "Quran reading" ceremony held at the "Millet Mosque" in the Palace.

İstanbul's newly elected mayor from the main opposition CHP, Ekrem İmamoğlu, also organized a commemoration ceremony in front of the municipality and gave a speech commemorating the "martyrs".

On 15 July 2016, the network of Gülen, once a close ally of the ruling AKP and Erdoğan, attempted to topple down Erdoğan by a military coup but it failed. Gülen’s CIA-linked network organized in crucial state institutions such as military, police, judiciary, and media helped Erdoğan to redesign and install his Islamic-rooted AKP party in power in 2002.

WHAT IS TO CELEBRATE?

The Communist Party of Turkey continues asking what these celebrations are for, arguing that there is no difference in the AKP’s and coup plotters’ future plans for Turkey.

The July 15 coup attempt and the bourgeois politics after constituted the subject of the second program of the newly launched podcasts called 'Voice of TKP'.

“Turkey experienced a coup attempt on the night of July 15, 2016. After the coup attempt failed in a couple of hours, the AKP government declared a state of emergency and suspended the law completely. Many people from the bureaucracy and universities out of those who participated in the coup and those who had fought the Gülenist menace for years were liquidated. So many unrelated people were arrested. Radios, associations, journals, and newspapers were shut down. Politics, the economy, and social life were redesigned with statutory decrees,” it is noted in the podcast

TKP also reminded that the party immediately declared after the failed coup that the attempt was not a mise-en-scène of the ruling party but was conducted by the Gülenist network with the support of some imperialist forces.

AKP GOVERNMENT COULD NOT BE SEPARATED FROM THE GULENIST NETWORK

“The forces that had helped Erdoğan come into power in 2002 and supported him all the time were concerned as it was getting difficult to control him,” TKP notes, adding that Erdoğan’s political style was also leading to social rage. As the international and domestic capitalist forces were anxious that such social reactions might get out of control, considering mass protests in the summer of 2013, they sought for an AKP government model without Erdoğan, eventually culminating in the coup attempt.

TKP rejects such assertions that the Gülenist network was a clandestine organization within the state apparatus, adding that this gang had been shaped by a wide coalition within the economy, educational life, foreign affairs, army and security forces of Turkey since the 1990s. The coup attempt was a result of the internal feud of this coalition. Moreover, the AKP government could not be separated from the Gülenist network or other religious groups.

As TKP described the coup attempt as an “anti-people” action, it underlined that the opposition parties such as CHP and HDP justified the AKP rule as they backed the government just after the failed coup. However, the AKP government was primarily responsible for the bloody coup attempt. The opposition’s support to Erdoğan helped him consolidate his power again following the failed coup.

Workers’ strikes were banned and new labor laws were enacted one after another during the rule of the state of emergency, which became a great opportunity for the capitalists. Thus, Erdoğan could address the bosses: “I’m your best servant. You don’t need to get rid of me.”

TKP reminds that the party organized a rally in September 2016 following the coup attempt. “We won’t surrender to reactionary forces, imperialism and coup plotters” was the theme of the meeting. With the participation of intellectuals, journalists, artists and thousands of people, the rally called on the people for an independent organization against the dilemma of the AKP rule and the Gülenist gang.

TKP says that this call is actual today, underlining that any pro-US, reactionary, pro-capitalist but “more controllable” political rule cannot be an alternative to Erdoğan’s regime. The communist party concludes that Turkey is so precious that it cannot be left to the hands of religious communities, bosses and pro-NATO forces.