Journalists accused of ‘revealing intelligence secrets’ on trial in Turkey

Journalists, who were detained after reporting on the death of a Turkish intelligence officer in Libya, went on trial on Wednesday due to ‘‘the violation of the Law on the State Intelligence Services and the Turkish National Intelligence Agency’’ and ‘‘revealing state secrets’’. The court has ruled for the continuation of detention for Barış Pehlivan, Hülya Kılınç, and Murat Ağırel, while Barış Terkoğlu, Ferhat Çelik and Aydın Keser have been released. 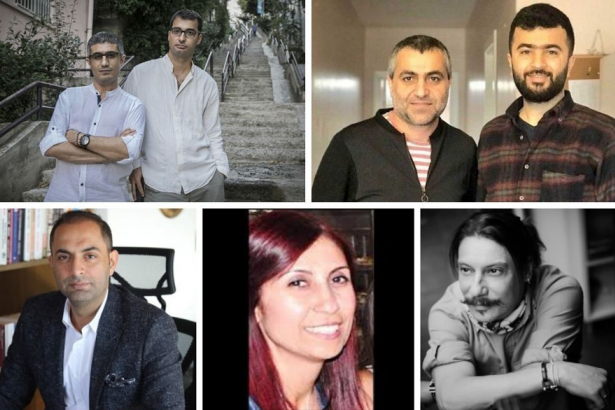 The first hearing of 8 journalists, including Odatv Chief Editor Barış Pehlivan and News Director Barış Terkoğlu, who were arrested after reporting on the funeral of a Turkish Intelligence Agency officer killed in Libya, was held on June 24, 2020.

The Turkish court has ruled for the release of Barış Terkoğlu, Ferhat Çelik and Aydın Keser on bail and international travel ban, while journalists Barış Pehlivan, Hülya Kılınç and Murat Ağırel are to remain behind bars. Next hearing will be held on September 9.

Turkish authorities accuse the journalists from Odatv news website, the pro-Kurdish newspaper Yeni Yaşam and the nationalist daily Yeni Çağ of ‘‘the Law on the State Intelligence Services and the Turkish National Intelligence Agency’’, and ‘‘revealing state secrets’’. If the Turkish court convicts the journalists of guilty, they face between 8 and 19 years in prison.

In addition to Terkoğlu and Pehlivan, Yeni Yaşam newspaper’s Editor-in-Chief Ferhat Çelik, News Editor Aydın Keser, reporter Hülya Kılınç, and daily Yeni Çağ columnist Murat Ağırel were charged with reporting the name and the funeral ceremony of a member of the Turkish National Intelligence Organization (MİT) who died in February as well as Turkey’s military activity in Libya.

While an arrest warrant was issued by the Turkish authorities for Erk Acarer, a columnist for the left-leaning BirGün daily, E.E., a press officer working at the press unit of the parliamentary main opposition Republican People’s Party (CHP)’s Akhisar District Municipality in the western province of Manisa, where the MİT officer’s funeral was held, is tried without arrest. Acarer was tried in absentia because he is currently living abroad.

In March, Turkish court had ruled to arrest the journalists, who wrote the intelligence officer’s story on Odatv, an over several intelligence-related offences, including obtaining, disclosing and revealing documents and information about the operations of Turkey’s MİT in Libya following a report that included photographs of a member of the Turkish intelligence agency who was among the first Turkish soldiers killed in Libya.

However, the MİT agent’s name had been previously mentioned in Turkish parliament by Ümit Özdağ, a lawmaker from the opposition party İYİP. Following a press conference of the lawmaker, many other media outlets already reported the story of the intelligence officer who lost his life in Libya.

After the arrestment of the journalists, the Information and Communication Technologies Authority (BTK) had blocked to access to Odatv news website from Turkey as of March 5.

Barış Terkoğlu and Barış Pehlivan were previously arrested in 2011 as part of the Ergenekon investigations, so-called legal cases initiated by the Gülenist movement in collaboration with the ruling Justice and Development Party (AKP) within Turkey’s judiciary.

Pehlivan and Terkoğlu are also the authors of a best-seller, ‘‘Metastaz’’, revealing how the AKP rule has emplaced pro-government Islamic sects in the state institutions after the anti-Gülenist purges.

A clique formed by the followers of the U.S.-based Islamic preacher Fethullah Gülen, the leader of the Gülen network [with its new name Fethullah Terrorist Organization (FETÖ)], within the state apparatus attempted a failed coup against the AKP government on July 15, 2016, and the Ergenekon cases were abated in November 2019.

As part of the AKP government’s efforts under the pretext of fighting the COVID-19 pandemic, Turkey has released many criminals, including a notorious mafia leader and former hitman who worked for MİT, from jail. However, numerous political prisoners, including journalists and political leaders have been left incarcerated.

Turkish parliament in April passed a law to allow the release of tens of thousands of prisoners with the aim of ‘‘easing overcrowding in jails and protecting detainees from the coronavirus disease’’.

The release of political prisoners, including detained journalists and politicians, was prevented by excluding ‘‘the crimes violating the Law on the State Intelligence Services and the Turkish National Intelligence Agency’’ from the bill, while many criminals such as Turkey’s notorious mafia leader Alaattin Çakıcı, who has strong ties to fascist Nationalist Movement Party (MHP), the coalition partner of the ruling AKP, were released under the new law on execution of sentence.

JOURNALISM UNDER SIEGE IN TURKEY

91 journalists are currently behind bars in Turkey, making the country one of the biggest jailers of journalists in the world, according to the data of the Journalists’ Union of Turkey (TGS).

AKP government have closed down approximately 70 newspapers, 20 magazines, 34 radio stations and 33 television channels due to their criticism to Turkish President Recep Tayyip Erdoğan and his government since the failed coup in 2016.