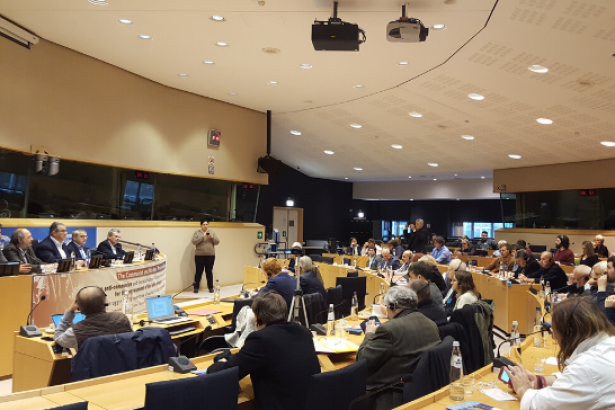 The full resolution is as follows:

To decisively stand by the communist and workers’ parties!

The Communist and Workers’ Parties of Europe that are participating in the European Communist Meeting 2019 condemn the recent outrageous anti-communist resolution of the EU-Parliament. It is a creation which aims at ravaging historical truth and lays the foundations for the vindication of fascism that is raising its head in Europe. The red flag at Reichstag bears indelible witness to who defeated Nazism – fascism.

The decisive contribution of the Soviet Union to the destruction of fascism – Nazism and the eternal condemnation of their crimes is drenched in the blood of millions of dead, millions of wounded, inestimable sacrifices of the anti-fascist struggle of the peoples of Europe. This cannot be erased, it cannot be distorted with a historical vileness such as that of the resolution that provocatively attempts to equate communism with fascism, which is born and bred of capitalism.

The working people, the peoples of Europe know full well that the new anti-popular and anti-democratic measures, the repression of the labor-popular movement goes hand in hand with the intensification of anti-communism, as always.

We call on them to condemn and to fight back against the anti-communist resolution of the European Parliament!

To turn their backs on anti-communism and to block it with their action against anti-communist hysteria and to strengthen in different ways the communist and workers’ parties of Europe!