Hizb ut-Tahrir, a jihadist terrorist organization aiming the re-establishment of the Islamic Khilafah, organized a ‘caliphate’ conference in Turkey’s Ankara just before the local elections of March 31 and called on Islamists to destroy the Republic 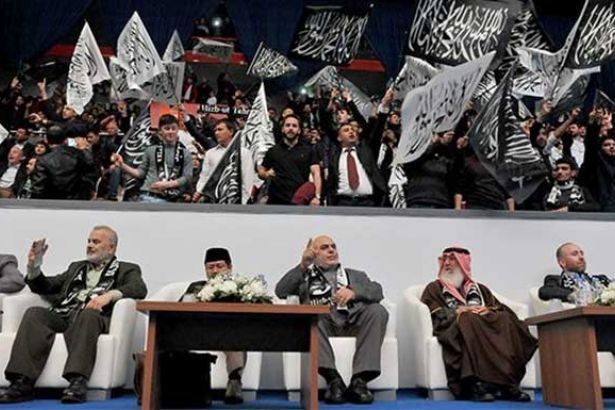 Hizb ut-Tahrir's branch in Turkey, which has not been considered as a terrorist organization by the Constitutional Court of Turkey despite the decisions of Court of Cassation and local courts, has called for the re-establishment of the Islamic Khilafah (Caliphate) to resume the Islamic way of life in the Muslim world by uniting Muslims upon their Islamic sects under the Shariah rule.

The jihadist organization had held many conferences in Ankara to gather pro-Khilafah figures, calling on the jihadists to ‘destroy the Republic’, especially during the period of Melih Gökçek, the former Mayor of Ankara Metropolitan Municipality.

Speaking on behalf of the Islamist terrorist organization, Mahmut Kar, the ‘Chief’ of Media Office of Hizb ut-Tahrir branch in Turkey, said in a video footage shared by the organization via its social media accounts, "Only caliphates can protect these territories. This Ummah [Islamic community] will raise such commanders, and re-establish the Khilafah very soon. Nobody will dare to protect the intruder Jews that day. They will not be able to stop us even if they reunite."

Stating that ‘the democratic republic system’ must be immediately destroyed, Kar noted, "The U.S. massacres will not end as long as the democratic republic exists. The blood of Muslims is on the hands of these rulers. Everyone is trying to please each other. Even secularists are doing everything to satisfy the conservatives. These political parties and their leaders turned the election campaigns into a theatre stage."

"The best system is in Islam, which is a monetary system based on gold and silver. This system is the only way of salvation not only for Turkey but also for the whole world. This system will be implemented with the Second Khilafah government to be re-established very soon, and will save humanity from the system of exploitation, paving the way for the spiritual peace and wealth," Kar said.

Jihadists affiliated with the terrorist group have been linked to violent acts in multiple countries. Some of them have been involved in coup attempts in the Middle East, and the murder of Ananta Bijoy Das, a pro-secularist blogger in Bangladesh, in March 2017.

In 2016, thousands of supporters of Hizb ut-Tahrir had gathered in Ankara to discuss the re-establishment of the caliphate, just three days after holding an international conference in Istanbul.

In 2018, the Constitutional Court of Turkey under the command of Islamist Turkish President Recep Tayyip Erdoğan ruled that Hizb ut-Tahrir cannot be considered a terrorist organization despite the decisions of the Court of Cassation and local courts.