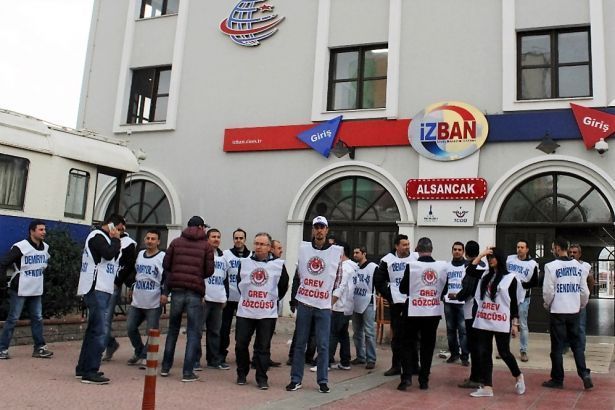 The workers' strike in İzmir suburban transportation system (İZBAN) is postponed for 60 days by a presidential decree on January 8.

According to the decision signed by Turkey's President Erdoğan and published in the Official Gazette, İZBAN workers' strike organized by the Railway Workers' Union was officially postponed on account of "disrupting the urban public transport services".

While the decision officially postpones the strike for 60 days, the strike is practically blocked because the workers do not have the right to restart the strike 60 days after.

The workers of İZBAN fighting for their rights were being targeted by the municipality of İzmir governed by the main opposition party CHP.

During the strike, İZBAN management resorted to an unconstitutional act of strike-breaking by employing seven retired train drivers during the strike in the absence of hundreds of workers and necessary railway controls and maintenance system.

About the strike that began on December 10, the Mayor of İzmir, Aziz Kocaoğlu, stated that when the economy was bad in the country, everyone would pay the costs, targeting İZBAN workers' not ending their strike after the municipality offered a wage increase less than what the workers demanded.

Tacettin Bayır, İzmir deputy of CHP, also supported the Mayor Kocaoğlu, stating that “This rate of raise could antagonize the business world against Mr. Kocaoğlu. Employees in the private and public sectors who hear about this raise would also demand the same rate from the employer. Industrialists, employers are not in the position to pay this much, they cannot afford it.”

Bayır was also called for the workers to postpone their strike sometime later than the local elections in March, arguing that the strike was not doing any good in the electoral period.

Over 300 workers had been on strike for more than three weeks after they disagreed with the İZBAN management during the collective bargaining process regarding their wages.

CHP deputy worries about the business world because of workers' strike