The Workers’ Committee of Haydarpaşa, working at an archaeological excavation site around the iconic Haydarpaşa railway station, will make a press statement for their rights as they could not get their wages amidst poor working conditions. 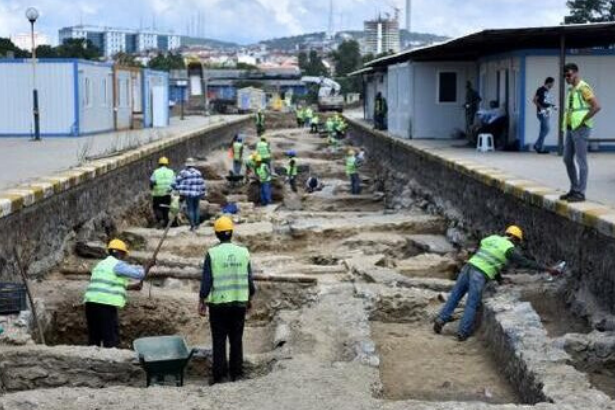 Over 400 construction workers could not get their wages for the past 3 months as they have been forced to work in poor conditions at a historical excavation site opened for restoration works of the Haydarpaşa train station in İstanbul’s famous district of Kadıköy on the Asian side.

The workers recently contacted PE (”We Breathe Down the Bosses’ Neck”), the solidarity network initiated by the Communist Party of Turkey (TKP), and established a committee to seek their rights and demands.

As the workers’ committee has announced that they will make a press statement on March 13 in Haydarpaşa in order to raise their voice, they have declared their demands. Immediate payment of the unpaid wages for 3 months, regular payment of wages via bank accounts, free food service, payment of monthly transportation fees in addition to the wages, humane conditions of catering, rest and bathroom are among the demands.

“We, the workers working at the historical excavation site of Haydarpaşa, are continuing to raise our struggle until our legal and human rights are met,” the workers’ committee has said, calling on the people to act in solidarity with their struggle.

The excavation workers have underlined that the big contractor companies are lying as they claim that they cannot afford to pay 500 workers’ minimum wages considering that these companies are among the biggest construction firms of the country and the world.

Haydarpaşa railway station was one of Turkey’s most iconic train stations as a major intercity and regional hub. The neoclassical structure was designed by German architects during the Ottoman era.

As of June 2013, however, all the train service to the station has been indefinitely suspended due to the restoration works along the line as Marmaray, a transcontinental commuter rail tunnel under the Bosphorus strait was launched. In 2018, archaeological remains of a Byzantine coastal town were found during the restoration works around the railway station.