On the third day of the strike at İstanbul’s Kadıköy Municipality, the union headquarter has signed the collective labor agreement with the municipal administration without notice of workers. Workers are decided to strike further. 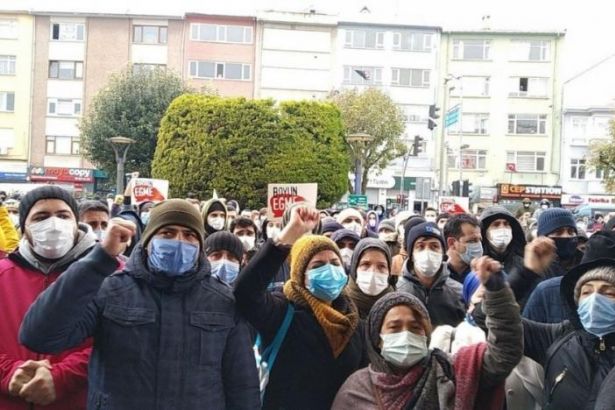 After the collective bargaining negotiations between 2,300 workers who are members of DİSK (Confederation of Progressive Trade Unions of Turkey) Genel-İş (The Public Services Employees Union of Turkey) Union and Kadıköy Municipality company could not be agreed upon, the workers decided to strike on February 16.

While the strike carried out by the workers of the Genel-İş No.1 Branch continued, it was learned that the union headquarters has signed the collective labor agreement with the municipal administration without notice of workers.

Union Branch management announced that they would not accept any contract that the worker did not approve.

During the support visit, the slogan "Workers are not your slaves" was shouted, the banner "Do not surrender, fight for your rights" was carried. During the visit, Senem Doruk Inam made a speech in the name of TKP Istanbul Provincial organization and said that the people of Kadıköy, the youth, women were with the workers and they would continue to resist altogether.

The Communist Youth of Turkey (TKG) also conveyed the message of solidarity to the workers of Kadıköy, “ Who do not surrender will win!” said. Young people from TKG announced that they stand behind the struggle of the municipal workers.

The struggle will continue

Despite Kadıköy Mayor stated that a collective agreement was signed with Genel-İş Union Headquarters, workers stated that they would not recognize the agreement made without their will.