Workers at the construction site of the third airport in Turkey’s İstanbul started a strike. Having protested several times before, the workers are known to have been suffering from malnutrition, inhumane working and living conditions, and mobbing and pressure to rush the work to open the airport on October 29, 2018 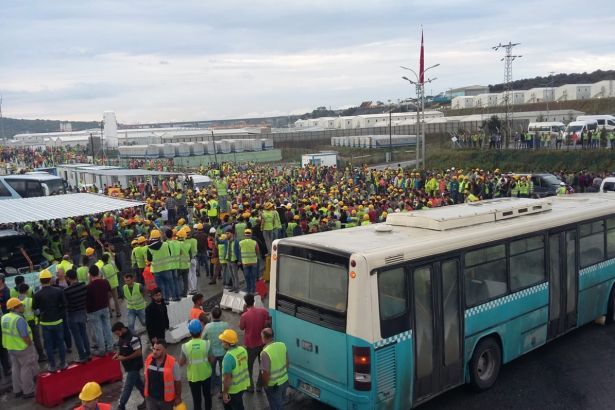 Workers at the construction site of the 3rd airport in İstanbul, Turkey, started a strike on 14 September after a shuttle vehicle had a crash, killing two workers and also injuring many the night before.

The crash is reported to have been due to heavy rain – however, the workers explain that the vehicles have to overdrive, and workers have to wait in long queues under rain because of the insufficient numbers of the vehicles.

Arriving at the site on the call of the construction company owners, the constabulary attacked the workers seeking their rights to live and work in humane conditions.

It is reported that nearly 10,000 workers live in the zone in the Akpınar area where the construction site is based. The number of workers on regular days is more than 20,000, but when the construction works at full speed, the number reaches over 36,000. The strike was not started by only those who live at the construction site, but also with the participation of the workers who live in various districts of İstanbul.

Interviewed by soL News, the workers say that they wait for shuttle vehicles for a long time under rain, meals and living conditions are horrible at the site, and deaths and injuries that occur while working are concealed from the public.

The workers explain that their sleeping areas are full of bedbugs and flea, and that the company owners detain the workers by saying that all problems would be fixed in a week.

On the other hand, having got flurried in the face of the workers taking action, the company owners called on the constabulary to intervene in the situation. After one of the bosses was heard to shout, “What good is constabulary for?!”, the constabulary –led by an officer with a rank of brigadier general!– attacked the workers with tear gas and water cannons and rubber bullets.

However, the resistance of the workers have not been broken, and the strike still goes on.

The 3rd Airport Workers of TKP (Communist Party of Turkey) also released a statement on the issue. Indicating that the company claims to be qualified to build an airport, but even fails to build proper routes for shuttle vehicles, the statement explained: “The transportation scandal due to the failure to build routes and an insufficient number of shuttle vehicles causes us to arrive at the construction site, which is only 5 kilometres away, in 45 minutes.

Thousands of workers suffered because the vehicles came late because of the heavy rain last night. That happened again this morning, and we rose up, blocking the way of the vehicles. Only then, the bosses realised our existence – for no one started to work in the construction site where 36,000 work at high pressure.”

Also mentioning that many of the workers started to be fired, the statement said: “If we organise, we win, and the bosses lose.”

After the attack of the constabulary, the workers announced their demands from the company:

- The protesting workers should not be fired.

- Those fired unknowingly should be reinstated.

- The problems with shuttle vehicles should be solved.

- Dorm rooms and bathrooms should be cleaned regularly.

- The problem of bedbugs should be solved.

- The infirmary should be provided with the equipment to treat the workers.

- The salaries should be put into the workers’ accounts, not delivered by hand.

- Retroactive pays should be given.

- Workers and the foremen should dine in the same hall.

- Authorities at the İGA (the partnership of companies to build the airport) responsible for these problems should be fired.

- These items should be read in front of the press.

- Occupational murders should be solved.

- Those who have not been paid for 6 months should be paid.

- Selim Öztürk (who is responsible for the Azerbaijani workers) should be fired.

- Workers should be provided with proper clothes.

The workers had held another protest in February this year, rising against poor conditions, mobbing and pressure, and occupational murders. Workers had also climbed up a crane in June this year, because they had not been paid for months.