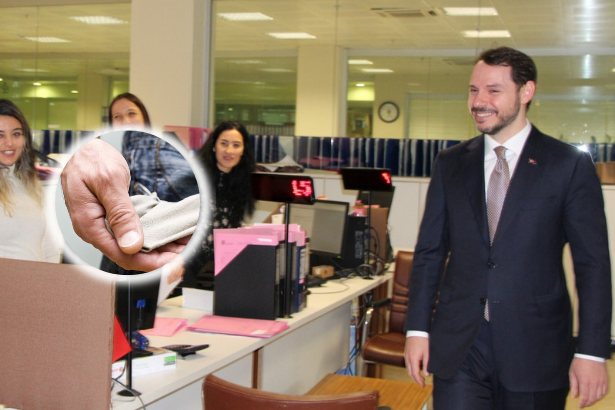 Although Turkish President Recep Tayyip Erdoğan’s son-in-law Berat Albayrak, the Minister of Treasury and Finance, claimed that the Turkish government brought the inflation rate under control, the situation in the country seems to be no good for the wage workers.

According to Adile Kaya from soL news, considering the last two years, the inflation rate has caused melting wages of working-class in Turkey. Inflation is decreasing, but it has already dealt a major blow to the wage earners during this process.

There is one factor that determines the natural limit of inflation: Transaction ends when prices rise above a certain level ─ which is called supply and demand equilibrium. This is an important factor in the decline of inflation. Especially the impoverished working class has no longer purchasing power in the country. Therefore, the price of goods and services that are not purchased by people cannot increase, says the expert.

Turkish authorities saying "our economy is growing" while the inflation rate is increasing, claim that "inflation is decreasing" while economic shrinkage and unemployment rate are escalating.

As some economists justifiably pointed out, it is necessary to compare the total price increase of the last two years with the increase in wages and incomes of the workers in the same period and try to survey "the wave of impoverishment", albeit roughly, rather than the change in the previous year or the previous month.

The average consumer price increase since the beginning of 2018 is in the range of 35%-40%.

Considering the government’s attempts to suppress the price increases, worsening working conditions, increasing unpaid overtime works, and increase in unemployment, it is quite clear that real wages are declining and millions of laborers are experiencing an irrepressible impoverishment in a very short period.

MONOPOLIES GETTING BENEFIT OF INFLATION

While the working class has become impoverished, there are profiteers who benefited from all this process of economic destruction. It is possible to monitor these profiteers from the various data for 2018 such as financial data of public companies, company information in the first 500 and second 500 rankings of the Istanbul Chamber of Industry.

In fact, monopolies and capital groups that managed to control their costs and that have not been affected by these increases reflected the price hikes on their goods and services and benefited from high inflation rates and the current economic crisis.

Moreover, the Turkish government has been supporting monopolies and capital groups by providing them particular privileges such as debt reliefs, debt restructuring, and new credit facilities covered by the public budget.

The most important reason behind the slowdown in price escalations or the deceleration of inflation is mathematics. Yet, the same mathematics reveals that the picture presented as the economic recovery by the Turkish government is a heavy wave of impoverishment.

Inflation, which peaked in September and October 2018, has been showing a falling tendency since November, despite some short-term fluctuations. According to August data released on September 3, 2019, the annual increase in the Producer Price Index (PPI) decreased to 13.45%, while it fell by 0.59% on a monthly basis. Similarly, the Consumer Price Index (CPI) increased by 0.86% on a monthly basis, while the annual increase was 15.01%.

The economic recovery in numbers in September is expected to continue, as the inflation rate is expected to fall to single-digit levels. But does this mean a real recovery?

MATHEMATICS OF ECONOMIC RECOVERY: 2018 WAS THE WORST!

First of all, it is necessary to say that "the economic recovery" mentioned above is mostly the result of mathematics. Since the depreciation of Turkish Lira and increase in oil/energy prices ─ which are the two most significant determinants ─ have not continued in the same way throughout the year, it is not possible to achieve the same rate of increase in inflation representing the change compared to the previous year.

Import-dependent structure of industrial production in Turkey leads the increases in exchange rates and oil/energy prices as one of the most important inputs for the Turkish economy to almost completely reflect in production costs and, therefore, in the PPI.

In addition to these, the rise in loan interest rates and the increase in financing costs due to the rising debt payments of companies mostly in debt with foreign currency were also effective in the record increase in PPI.

DID THE GOVERNMENT SOLVE THE HIGH INFLATION PROBLEM?

In September and October 2019, "mathematics" or "the base effect" will work even more strongly and the expectation on single-digit levels of inflation is likely to be realized.

Yet, from a short-term perspective, "mathematics" will begin to work reverse as of November 2019. In other words, even if single-digit level of inflation is observed in September and October, it is very likely that inflation rates will reach double-digit levels as from November ─ if there is no cheap flow of capital to Turkey due to international plethora of money, a strong decline in oil prices or a huge increase in export.

When it is examined from a medium-term perspective, the uncertainties even challenging to mathematics are the "fate" of Turkish capitalism.

It can be definitely said that the decline in raw vegetable and fruit prices, which has the greatest impact on the decline in consumer prices along with ‘mathematics’, is the result of increased production due to the high prices of the previous year. Thus, the opposite trend will be strengthened in the next year under the conditions in which the Turkish agriculture has been plundered by the neoliberal policies.

Due to the price increases in raw food in world markets and Turkey’s import dependency in food prices to the international prices, raw vegetable and fruit prices in the country have significantly increased. It is possible to predict similar uncertainties for the prices of other basic inputs, especially for oil prices.

REASON BEHIND THE DECREASE IN CONSUMER GOODS: NOBODY CAN AFFORD THEM!

Domestic demand, which has been suppressed along with the rising impoverishment, is also an important factor in the so-called economic recovery in 2019.

The decline in prices of clothing, footwear, and durable consumer goods is strongly related to these developments.

Prices do not increase, but no one can buy anyway!

More precisely, there is no price increase under the current circumstances because people cannot afford to buy them.