Idlib after Erdogan-Putin meeting on Syria

A military operation in Syria’s Idlib has been suspended after the talks between Turkish President Recep Tayyip Erdoğan and Russian President Vladimir Putin. The agreement signed after the meeting includes the establishment of a ‘‘buffer zone’’ in Idlib under the control of Russia and Turkey 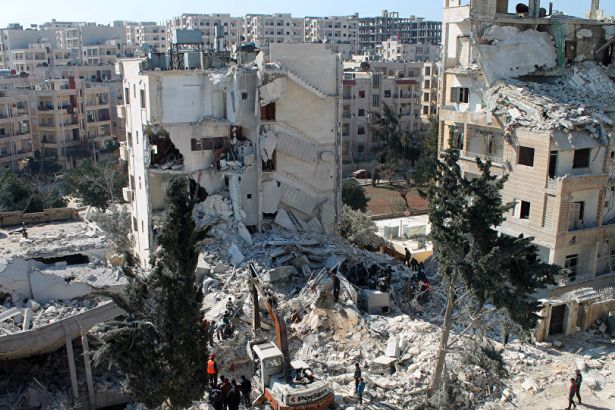 The trilateral summit among Russia, Iran and Turkey held in Tehran on September 7 had resulted without a definitive agreement on Syria. While Russia and Iran came out in favour of a military operation in Idlib after the trilateral summit, Turkey issued a call for a ceasefire agreement.

After the Tehran Summit, it had been announced that Turkish President Recep Tayyip Erdoğan and Russian President Vladimir Putin would conduct negotiations once again. Erdoğan-Putin meeting held in Russia’s Sochi ended up with the suspension of a possible Idlib operation.

DETAILS OF THE AGREEMENT ON SYRIA’S IDLIB

According to the agreement reached between Turkish President Recep Tayyip Erdoğan and Russian President Vladimir Putin, a ‘‘demilitarized zone’’ will be established in Idlib. The zone to be jointly controlled by Turkey and Russia will distinguish Syrian government forces from jihadists controlling Idlib province of Syria. Thus, any land (ground) warfare to Idlib will be prevented.

It had been witnessed just before the agreement that Turkish government began to deploy its military units and entered Syria with hundreds of military vehicles as the tanks belonging to the Turkish Armed Forces (TAF) were deployed to the north of Hama, a west-central city of Syria.

Although there was no detail about the location of the buffer zone to be established in Idlib, Putin told a joint press conference with Turkish President that they agreed to create along the contact line between the armed opposition and government troops a demilitarized zone of a depth of 15-20 km, with the withdrawal from there of radically-minded rebels, including al-Nusra by October 15, and that the transition points among Aleppo, Idlib and Latakia would be preserved.

SHOIGU: ‘‘THERE WOULD NOT BE A MILITARY OPERATION IN IDLIB’’

The Syrian army was preparing for a large-scale military operation carried out against jihadists in Idlib for weeks.

In the past statements made by Russian officials, the presence of Al-Qaeda in Idlib was a sufficient reason for a military operation in Idlib. Even if Idlib was declared a de-conflict zone in previous years, the Islamic State (IS) and Al-Qaeda had been excluded from this agreement.

The buffer zone, which will also ensure the protection of Al-Qaeda, will be implemented on October 15, 2018.

WAS THE SYRIAN GOVERNMENT OUT OF THE PICTURE?

Another remarkable point in Russian Defense Minister Sergei Shoigu’s statements was his response to the journalists’ questions.

To the question about whether the Syrian government has accepted the suspension of military operation in Idlib, Shoigu responded that this issue would be discussed with Damascus on the advancing hours in the day. Thus, Shoigu confessed that the establishment of a demilitarized zone in Idlib was accepted by Russia without the permission of the Syrian government.

A majority of Idlib province is under control of Al-Qaeda affiliated Hay’at Tahrir al-Sham (HTS) and Turkistan Islamic Party, an armed Uyghur Salafist jihadist group. It is estimated that there are at least 30,000 armed Al-Qaeda members in Idlib.

Turkey did not deem Hay’at Tahrir al-Sham, which controls a significant part of Idlib, as a terrorist organization until September 2018. Yet, certain demands of the Turkish government, which began to offer some suggestions to jihadist groups due to the forthcoming Idlib operation, were not accepted by Hay’at Tahrir al-Sham. Thereupon, Turkey has classified HTS as a ‘‘terrorist group’’ for the first time in the early September.

In addition to Al-Qaeda-affiliated groups, Ahrar al-Sham, The Suqour al-Sham Brigades, The Nour al-Din al-Zenki Movement and some other Islamist terrorist groups linked to the Free Syrian Army (FSA) have positions in Idlib. A total of more than 70,000 armed jihadists are said to be located in the region.

CAN TURKEY MANAGE TO REMOVE AL-QAEDA FROM THE REGION?

Reaching an agreement on the establishment of a buffer zone in Idlib, Turkey has to eliminate the presence of Al-Qaeda terrorists in the region. Erdoğan and Putin have agreed upon the ‘‘continuation of cooperation in fighting against terrorists in Syria’’.

However, it remains uncertain what will happen to ten thousands of armed Al-Qaeda jihadists. Al-Qaeda terrorists, which were previously active under the name of ‘‘Al-Nusra’’ in Syria, has changed their organizational name in order to try to ‘‘restore their image (or impression)’’ particularly in the international system.

The Turkish government, which is not expected to clash with jihadist groups controlling Idlib, might take a similar step and try to ‘‘rehabilitate’’ Al-Qaeda members.

Yet, it is not a realistic scenario that ten thousands of armed HTS militants would easily accept to be mobilized under the roof of other armed groups which are so-called ‘‘moderate’’, while bloody internal conflicts are still continuing in Idlib.

‘THEY COULD BE EMPLACED IN CONSERVATIVE PROVINCES’

Another claim regarding the Turkistan Islamic Party, mostly under the influence of the Turkish government, has been made by Asia Times. The terrorist group consisting of Uyghur jihadists has been backed by Turkey in Syria.

Listing the possibilities of future of the Turkistan Islamic Party strongly criticized by the Chinese government, Asia Times claims that the members of this jihadist group may be individually relocated to Turkey.

‘‘Conservative cities in Turkey such as Gaziantep, Tarsus and Konya will be likely retreats should the jihadis be pushed from the province entirely’’, according to the report in Asia Times published on September 17.

‘IT WOULD BE A TEST FOR TURKEY’

Underlining that Turkey has been given the responsibility to get rid of Al-Qaeda in the region, Ali Abdul Karim, Syria’s Ambassador to Lebanon, said in an interview with Lebanon’s al-Jadeed TV that ‘‘They [Turkish government] are under pressure now and I believe they will try.’’

Syrian Ambassador to Lebanon also noted that the deal between Russia and Turkey would test Turkey’s abilities to deliver on promises to disarm jihadists.

A source from the Syrian Foreign Ministry also said in a statement published by state media that ‘‘it welcomed any agreement that spared blood.’’

Military options for Idlib will be brought to the table again in case Turkey fails to liquidate Al-Qaeda in the region.

WHY DID RUSSIA PURSUE A TIMID POLICY AFTER THE SUMMIT?

Despite the military preparations of Syria, it has been witnessed that Russia and Iran have pursued a more timid policy after the trilateral summit in Tehran.

The statements made by the United States, the United Kingdom, France and Germany signalled the possibility of an attack on the Syrian government.

As the reason of this attack to Syria, imperialist powers claimed that ‘‘chemical weapons’’ would be used by the Syrian government in Idlib operation. Although Russia stated that an attempt for ‘‘provocation with chemical weapon usage’’ would be performed by jihadists, it had not prevented the NATO members from attacking Syria in the past.

It was seen that NATO had begun to prepare a military campaign near Syria and NATO frigates approached the Syrian coasts just before the meeting between Turkish President Tayyip Erdoğan and Russian President Vladimir Putin.

IRAN: ‘WE WON’T PARTICIPATE IN ANY MILITARY OPERATION IN IDLIB’’

The statements from Iran before the meeting were also striking. Iranian Foreign Ministry spokesperson Behram Kasımi had said in a statement that Iran would not participate in any military operations in Idlib.

Iran, dealing with sanctions imposed by the U.S. President Donald Trump, has certain economic problems. It is noteworthy that the protests in Iran erupted in the regions constituting the grassroots of the current political power. In these protests, demonstrators strongly criticize Iran’s foreign policies on Syria and Iraq. Therefore, Iran might also pursue a timid policy due to the fear of rising tensions in the region after a possible Idlib operation and new economic sanctions imposed by the U.S.

In addition to these, the governments of Iran, Russia and Syria have gained time with the suspension of a military operation in Idlib.

ISRAEL’S ATTACK ON SYRIA AFTER THE AGREEMENT

Immediately after the agreement on Idlib, Israel warplanes hit Syria. In the attack that Russia was not priorly given notice, 15 Russian soldiers lost their lives after Israel used the Russian aircraft as a shield against Syrian defense missiles.

Meeting with Avigdor Lieberman, the Defense Minister of Israel just after Israel’s attack on Russian aircraft, Russian Defense Minister Sergei Shoigu stated Israel is the only responsible for this incident.

Thus, Israel tested its ability to attack Syria and the retaliation for its attack immediately after the retreat of Russia and Iran on the Idlib issue.

A RECONCILIATION BETWEEN TURKEY AND ISRAEL ON IDLIB?

Israel did not want a military operation in Idlib due to the fact that the Syrian government would establish a full control over the country after the operation.