People gathered in İstanbul’s Kadıköy district to protest the Flormar authorities and show solidarity with the resisting workers, earlier in the day workers in front of the factory were attacked 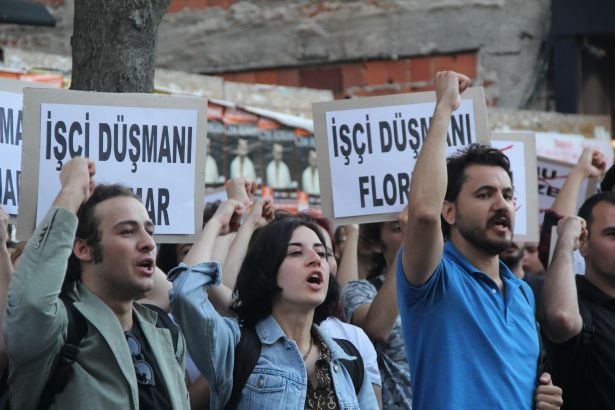 Gülçin Uz, a member of the Central Committee of the Communist Party of Turkey (TKP), delivered an opening speech. Underlining that those who want to change the capitalist order and those who resist in front of the factory share one fate, Uz also replied to the government authorities who claim that the country’s economy would be among the top ten in the world: "We have already been in the top ten for years. Turkey has been among the top ten in unemployment, poverty, child labour, and non-covered employment."

Uz reminded that whenever workers stand up for their rights, they become a nightmare for capitalists, and that workers are always expected to confine themselves to what is given to them and remain silent. "What do we want? We want a country where people do not exploit others, where poverty and unemployment are eliminated, where occupational murders are given an end, where nature and history are protected, and where informal working and child labour have disappeared," Uz said.

One of the resisting workers also gave a speech. Explaining the unionising process since the beginning of the year, the worker stated that: “First, they fired 12 of our workfellows. They thought they could stop our struggle for unionising. But as they have acted like this, we have clamped together, growing in number even more.”

Also reminding that more workers were fired because they supported their resisting friends with applause and whistling, the workers said: "They stop at nothing to prevent us from communicating with our friends inside, but they will never achieve in this. We did not ask for much."

Three of the independent socialist candidates of "This Social Order Must Change Platform" also participated in the rally – Orhan Aydın, Aydemir Güler, and Mustafa Tozkoparan.

Taking the floor after the resisting worker, Orhan Aydın said: "Together, we will dump this social order full of thievery, plunder, lies, and torture. This order will end, and the government of labour will be established."

Since it was the 5th anniversary of the June Resistance of 2013, Aydın also stated: "We memorialise our brothers with love and respect who were killed during the June Resistance. We know their murderers, and we will certainly bring them to account."

Another candidate of the Platform, Aydemir Güler, started his speech by saluting the Resistance: "Where in the history was it seen that 10 million, 15 million people evaporated? Is such a thing possible?"

Güler pointed out that the Resistance seems to have retreated because there was not an organisation, and the apparent silence of the people stemmed from the disorganisation of the working class. Güler explained that the reason the socialist independent candidates were running for the elections was to bring forward what was missing five years ago: "We ask for your votes not for ourselves or our vote rates – we ask for your votes for the 15 million people who stood up, fought, changed the country for a few months, for workers of Flormar, for women murdered."

Yet another candidate of the Platform, Mustafa Tozkoparan, a metal worker, also delivered a speech. Stating that he worked as a metal worker for 20 years, Tozkoparan said: "The resistance in Flormar is not the first, nor will it be the last. When will be the last one, then? When workers have stood up and established their own government."

Tozkoparan explained that the candidates of the Platform run to change the social order, so that no one could be fired like the workers of Flormar again.

On the other hand, a provocative event took place in front of the factory in the Gebze district of the city of Kocaeli the same day. The driver of a shuttle vehicle carrying workers to the factory drove the vehicle towards the resisting workers, lightly injuring three of them. The driver also drew out a knife, and attacked the workers.

The vice president of the union stated that they suspected that the driver had his blood up by the authorities of the company, and was led to provoke the workers.