"Humanity should learn by heart to stay away from imperialism, exploiters, religious and nationalist fanaticism"

soL news interviewed Kemal Okuyan, the General Secretary of the Communist Party of Turkey (TKP) about the recent political developments regarding Syria and the 21st International Meeting of the Communist and Workers' Parties (IMCWP) that was recently held in Turkey 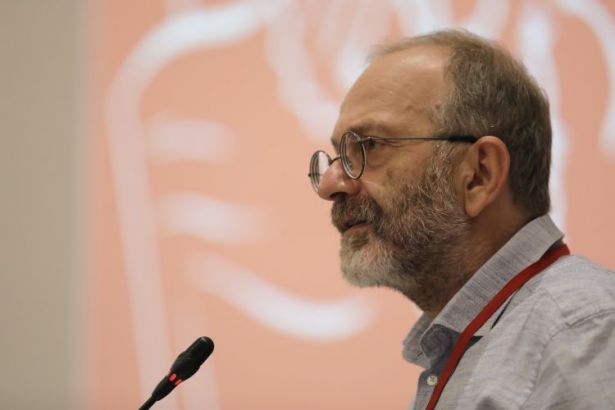 The 21st International Meeting of the Communist and Workers' Parties was recently held in İzmir. The Communist Party of Turkey (TKP) hosted this meeting for the second time after four years. How was the meeting in general and from the point of TKP?

Yes, the International Meeting of the Communist and Workers' Parties was held in Turkey again after 2015. We undertook the organization of this year’s meeting along with the Communist Party of Greece (KKE). Doubtlessly, this has a political meaning rather than a technical one. The ties of the two parties are increasingly deepening; we have left behind a new phase in these relations. The members of the two parties took responsibility at the meeting, the meeting council was composed of the members of these parties, and there were two opening speeches at the meeting. This is something more than a symbolic issue.

It is known that KKE and TKP have very similar opinions within the world communist movement. Can we say the success of the meeting stands for the growing influence of this line?

We do not see it that way. First of all, our responsibility was to enable the productivity and safety of the meeting and to provide proper conditions for the parties to make evaluations and debates. This is the success criterion of the meeting. It’s not a secret that there are different tendencies among the communist parties. Moreover, these differences can turn into contradictions in some examples. On the other hand, the communist parties represent a huge background; there is a huge experience of struggle in the past, today some communist parties are among leading actors in their countries. Our meetings are of great importance for the parties to understand and listen to each other, and to share their experiences and improve their cooperation. The communist parties need more interaction and more theoretical and political production to head for a stronger, more organized, more combative and more revolutionary process. The success criterion of these meetings is not this or that tendency gets stronger but the aim of a stronger interaction between the parties. In this respect, the meeting in İzmir was highly successful.

Can you elaborate on it? What are the priorities of TKP within the international communist movement?

Contributing to stronger cooperation and solidarity among all the parties; contributing to the creation of a productive environment of debate; doing all we can do for a collective effort for the political and organizational success of the revolutionary line that we take part in. Carrying out all these in comradely relations among the parties by paying regard not to intervene in their internal affairs whilst taking the principle of equality into consideration. I think, in these terms, TKP has become a mature, constructive, productive and prestigious party.

Where will the next meeting be held?

We decided in İzmir that the next International Meeting of the Communist and Workers' Parties will be held in the Democratic People’s Republic of Korea.

TKP was going to organize a big rally in an open-air theatre on the same days in İzmir. You announced that this event was canceled because of the developments in Syria. Can you say more about the cancellation?

The big event that we scheduled to organize on October 19 was going to be held during the International Meeting of the Communist Parties; yet it was going to be an event of TKP, which would be independent of the meeting. The delegates from foreign countries and more than a hundred guests from Greece were also going to participate in the event. There were some uncertain things regarding the developments in Syria, and some safety concerns could arise. The event was planned as a meeting the international guests could participate as some of them were going to speak while our party’s social goals were going to be the main agenda of the event.

Although we were in no doubt that the event would be very good, we thought that holding such an event would be inappropriate as Turkey was performing a cross-border military operation. Moreover, the governor's office might have banned the event. We have been accustomed to such possibilities, but it would be difficult for us in organizational terms, considering that carrying out this event in which foreign guests and speakers were going to attend was still uncertain. We can suggest that we made a correct decision considering the angle between the contents of the event and the rapidly changing developments. Such events are part of our struggle; the life and the struggle continue.

Putin and Erdoğan signed a very comprehensive agreement regarding Syria. What can say about this agreement?

Instead of discussing this agreement alone, we need to evaluate it along with the agreement between the U.S. and Turkey. These two agreements stand for the fact that the rules of the game have been readjusted in terms of the upcoming challenging conflicts in Syria or in the northern part of it. Or else, there is not any solution, and we witness open-ended issues.

The media tries to explain the incidents by focusing on the “winners” and the “losers”. It is too early to say so. We already know and observe that the U.S. imperialism, which is a headache for the peoples of the world, has difficulty in maintaining its hegemony almost everywhere in the world. They also cannot get what they want in Syria; but this is not a new thing, they have not been able to manage for a couple of years.

From now on, the U.S. will accept the new basis, and continue to fight and unfortunately shed blood for its own interests with more “realistic” goals. There is a military outcome in Syria, which is a success for the Syrian people. However, there is not any solution yet. Turkey has violated the borders of a sovereign country. Moreover, Turkey has pushed the so-called Syrian National Army that is composed of some groups that have worked like a machine of crime for years…

There is not any solution at this point. There is great uncertainty at the moment. It is ambiguous how the relations between the Assad administration and PYD or SDF will develop. The military presence of the U.S. is not only composed of thousands of troops, they would not leave Syria immediately. Despite Trump’s tactless moves, U.S. imperialism has instruments through which it can adapt itself to the new conditions.

Moreover, there are the troops of dozens of countries in Syria, there are tens of thousands of reactionary militants from dozens of foreign countries… How Russia will guarantee its own political and economic interests, the factor of Iran… Turkey’s plan to construct new settlements in order to accommodate the refugees into these zones… There is not any clue regarding these issues in Sochi (agreement), there are some important developments on the rules of the upcoming conflicts. They have only set up new rules.

What we should defend is that those forces that illegally infiltrated into Syria and all the foreign military forces should withdraw at first hand, then let the Syrians do what they should do in order to establish a free, egalitarian and fraternal social order. Not only the international monopolies, the Islamist gangs used by those monopolies for their interests, or the groups resorting to nationalism or sectarianism have dragged Syria into this point, but also the pre-war liberal economic policies played a role.

We always say that fraternity, freedom, independence, sovereignty, peace, and democracy are just dreams and lies as long as this exploitative system remains. Stay away from imperialism, the exploiters, and religious and nationalist fanaticism: this is what humanity should learn by heart. The people face disasters whenever this approach is disrupted.

Some say that all this process has strengthened Erdoğan’s hand. What can you say?

One should stay away from daily evaluations. Some said a week ago that “it’s over, the sanctions are coming”… In today’s world, the big powers have difficulty in playmaking because capitalism is face to face with a historical blockage. The big power is something that is able to reevaluate its position against surprising moves in such an unsteady environment. Despite Trump, U.S. imperialism has still this ability to some degree. Putin and his team have provided Russia with a high political influence that is much over its economic power.

We should accept that Erdoğan is well aware of this blockage in the international arena. He has seriously become experienced about how to survive in this environment of blockage and competition to which he owes his political life. However, what really relieves Erdoğan is that he has an infallible guide regarding the weak points of his opposition in Turkey. Erdoğan knows how all the parties in the parliament would respond to this or that move, and how and what problems he can create within these parties.

Everyone knows that his recent military move in Syria is also related to domestic policies, yet they all eventually implement the scenario on the desk. It is weird, and I guess this fake fight will continue until our people say "stop it". On the other hand, I think those who claim that Erdoğan’s hand has strengthened are exaggerating the situation. What has taken place will force Erdoğan to revise most of his plans. He will do so, yet his field to maneuver will inevitably get narrowed while doing so.

Let me repeat, the description of “winners” and “losers” is wrong. The peoples can win only on one condition during the inner fight of international monopolies: By standing against the international monopolies to strengthen their position. Let me tell something against those who hallucinate: there would be no benefit from a project that the Turkish construction monopolies highly desire, one cannot speak of peace or freedom in this country as long as Syria’s oil is controlled by private companies.