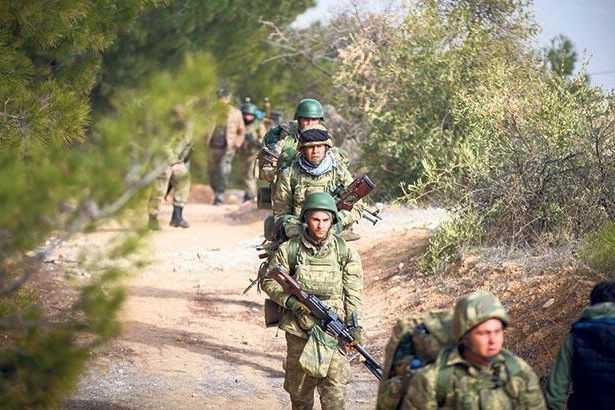 First, it was written in the Arabic press that Turkey requested to use Tunisia’s facilities during the shipment and was turned down. Then, the Presidency of Tunisia denied. In the statement, it was told Erdoğan did not mention such kind of a request. Still, AKP media construed the fact as it was expanded as “Turkey did not make ANY request”.

In the press, it was also told that Algeria’s door was also slammed in Turkey’s face. I have not witnessed the contrary in here at the moment I am writing these.

However, if you ask me, there is nothing unclear here. Whoever intends to intervene overseas with the military they will try to find footholds around.

There is even more…

The day AKP is not developing an aggressive project to climb up the imperialist hierarchy is the day AKP crumples up.

Syria has not been able to satisfy this need for a long while. There is no suspicion that Turkey’s operational capacity is not depleted. Contrarily, AKP has made itself accepted as a settled actor in Syria. But it is not enough.

Because the driving force of AKP’s existence in Syria is the impossibility of settling of any dispute in the Middle East. IS ends and comes back. Independent Kurdistan is dragged to the forefront and then pulled back. The two facts of Turkey’s back being against the wall in Syria and Turkey’s occupational presence in the region do not need to necessarily contradict.

Concretely, when AKP faces a balance beyond its capabilities, it exists adapting to them. This strange positioning cannot provide Erdoğan his needed ground to jump higher.

Libya could be a fantasy. But AKP-ruled Turkey’s need for Libya-likes is real.

How much of it is a fantasy, and how much is realistic, we will see that soon. The world’s politics gain pace and the time for waiting for the revealing of the events is getting short.

AKP decided to consider the civil war in Libya going in a general stalemate, the parties and alliances being overly unstable, everyone moving without principled engagements as an opportunity to revive Ottomanism that crashed in Syria. Erdoğan could be exaggerating the “strategic mind” of MIT (Turkish Intelligence Service) during the opening of the new complex. But deeming the Libya step as a lunatic’s wandering would be dead wrong.

It is true that there are lunatics everywhere. For example, one of these, one of the military advisors of “the Leader” confessed recently that he is sick enough to claim that “they are getting prepared for the arrival of Mahdi” (religious apocalyptic savior in Islam). But seeing those inoperable cases cannot be an excuse for misinterpreting the facts. Search for new alliances mentioned above which seem to have no result so far shows that a government doomed to fighting wars cannot do without trying to drag others as well.

Since the age of imperialism was declared, the world is going literally mad. It is right to remember Hitler and Mussolini in the first place. But if one looks closely then it would definitely be seen that the situation is different in only quantity in other imperialist countries.

Most recently, Abdul-Mahdi, the vice president of Iraq told how he was threatened by the Americans. The claim that the threat was even taken further by US authorities including Trump to a massacre organization by the aid of snipers is still out there. Who could say “no way!” after the attack on the convoy of Iranian commander?

Tossing the region into the fire is no doubt a lunatic’s work. But what puts these lunatics to the governing bodies of this system is imperialism itself. Or rather, it is impossible the other way. The Iraqi government is as well trying to drag China into the unbearable fire of the region. This is unavoidable and the heat is likely to increase.

It would be senseless to ignore the imperialist rivalry and the fire of war dynamics. AKP’s campaign against Libya is also in this context. The situation is serious. Capitalism cannot be without rivalry. In imperialist age, it is further impossible to be in this rivalry without arms if you intend to climb higher. This race needs more than any time more lunatics.

But it is not cleverer to suggest reducing the fever of this world with an aspirin.

Instead, the ones who look for how to defeat imperialism are to see the Bolsheviks who discovered the possibility of a revolution within the heat of the war…