The Turkish right-wing parties flared the dispute of Hagia Sophia amidst the COVID-19 pandemic and normalization process. Art historian Engin Akyurek evaluated the status of Hagia Sophia, which became a controversial topic for Turkish domestic policy recently, for soL news. 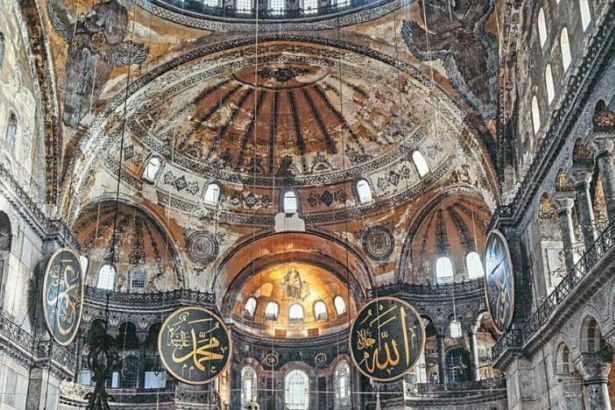 The dispute over the historical site Hagia Sophia in Istanbul has been a controversial topic in Turkish politics, as the Islamists continue carrying campaigns to convert the site into a mosque. Turkey's right-wing circles have been periodically heating the dispute as a political tool.

Abdulkadir Selvi, a columnist close to the governmental sources, has recently claimed once again that the Turkish President Erdogan wants the museum to be turned into a mosque. This week, the leader of the ultra-nationalist and AKP-ally MHP, Devlet Bahçeli, also made statements supporting the conversion of the museum to a sanctuary with an aggressive tone.

Erdogan had opposed the conversion of Hagia Sophia last year and accused those who demanded it of plotting against the government since a possible conversion is considered to cause international reactions.

A prominent art historian in Turkey, Engin Akyurek, evaluated the heated debate, underlining that Hagia Sophia should be protected as a museum. Akyurek stated that Hagia Sophia is a common cultural value of humanity and people have the right to visit this artefact without any restraints.

"Its value exceeds historical ages, regional and cultural boundaries. It is unique and impossible to rebuild," Akyurek added.

The expert also underlined that the artefact is a masterpiece of human intelligence and an important example of the history of architecture, representing an important milestone in human history, and reminded that Istanbul does not need any additional sanctuary for the Muslim population.

If converted, the visitors will only be able to visit limited areas; visits will not be possible during pray times; and women will be requested to wear a headscarf during their visit, according to Akyurek.

The most controversial issue is covering the floor with carpet which will cover all the marble ground, Akyurek stated, and visitors will not be able to see some of the artefacts due to Islamic regulations.

Having been built in the 6th century (532-537) as a Greek Orthodox patriarchal cathedral in İstanbul, Hagia Sophia was turned into a mosque in 1453 when the city was conquered by the Ottoman Empire under Mehmed the Conqueror. The building was turned into a museum in 1934 in the Republican era under Mustafa Kemal Atatürk, the founder of the Republic of Turkey.

As Hagia Sophia, a UNESCO World Heritage site, was turned into a museum, Turkey’s Islamists have frequently carried out campaigns since then in order to turn the historic building into a mosque again. On March 31, 2018, Turkish President Erdoğan recited verses from the Quran for the first time in Hagia Sophia, strengthening the Islamic sentiments of his political base.

Hagia Sophia must be preserved as museum: Turkey’s Science-Enlightenment Academy