"Greek-Turkish relations are entangled in wider imperialist competition and plans"

soL news interviewed Eliseos Vagenas, member of the CC and head of the section of International Relations of the CC of the KKE on the new round of Turkey-Greece exploratory talks 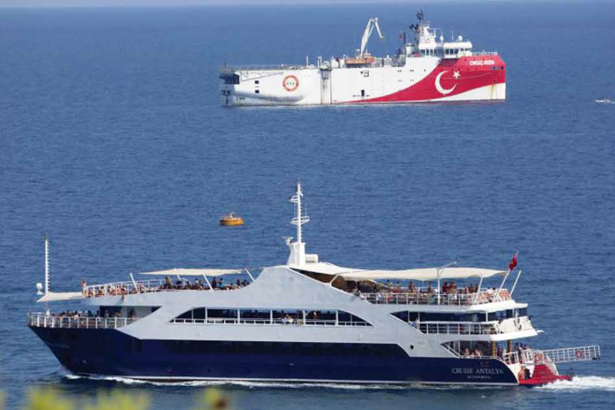 The AKP government has made almost a U-turn regarding the relations with the EU, and Erdoğan has totally changed his hostile attitude towards some European leaders. As the people of Turkey, we are very much used to these radical maneuvers of the Erdoğan government. But how was this move interpreted in Greece?

Turkey is a NATO member, a “strategic partner” of the EU; it is negotiating about the Customs Union and the agreement on refugees, it has particular economic and military relations with Germany, Italy and Spain that go through different phases. The Erdoğan government, expressing the interests of the bourgeoisie of the country and not of the Turkish people, is in a continuous eastern bazaar-style haggling with the Euro-Atlantic forces, which seek to keep Turkey away from the “bad influence” - as they have characterized it- of their competitors, i.e. Russia and China. Another element of the geopolitical competition is the various maneuvers of bourgeois politicians that cannot cloud the essence of the issue, which is the sharpening of the struggle in our region over the energy resources, the transfer routes, the geopolitical pillars, and the market shares.

What do you expect from these exploratory talks?

We have repeatedly expressed our concern about the overall developments in our region and the Greek-Turkish relations course. Intensification and sharpening will coexist with the attempt of a compromising solution for the co-exploitation of the Aegean and the East Mediterranean favouring energy companies. In the past years, 60 rounds of such talks, as well as dozens of meetings in the NATO and EU framework, took place. Therefore, the issue is not the “lack of contact” between the two parts, which is finally re-established, as the Greek government claims in order to embellish the restart of the exploratory talks. The problem lies in the fact that in the context of these talks, the USA, NATO, and the EU intervene, that is, those who are responsible for the sharpening of the situation in the region, the creation of faits accomplis and the tolerance of the claims of the Turkish bourgeoisie in the region. Thus, Greek-Turkish relations are entangled in the wider imperialist competition and plans, which with or without talks pose great dangers for the peoples' peace and security.

The Greek parliament recently approved the revision and extension of territorial waters in the Ionian sea, from 6 to 12 nautical miles. What do you think about the aim and the timing of this decision? You also have a parliamentary representation, and we know that you were the only party to abstain from such a decision. What is your position on this issue?

The KKE has a careful approach towards the issues of borders, the agreements that set them, and the sovereign rights that result from them. Such issues are the territorial waters, which each country can extend up to 12 nautical miles based on the International Convention on the Law of the Sea. We consider that this right, which Turkey has already exerted in the Black Sea and the East Mediterranean, is a right of our country and Turkey as well, while where the distance between the two shores is smaller than 24 miles, the equidistance principle must be followed. The relevant provisions of the International Law on the EEZ must be equally observed.

These issues regarding the sovereign rights of the country undoubtedly concern the KKE, which, as the party of the working class and the popular strata of Greece, knows very well that under a different social-economic and political situation, in a Greece that will not be a part of imperialist unions and where the people will hold the keys of economy and power, the exploitation of the natural resources will be to the benefit of the people, and this applies to all peoples. Today, on the contrary, the monopolies try to grab these natural riches, with the result that the people cannot use them, while there may be heavy consequences for the peoples, who are in danger of paying the bourgeoisies' competition with their own blood, as well as risks for the environment. The KKE stressed all the above during the discussion in the Greek Parliament on the extension of the territorial waters in the Ionian Sea because we see all these contradictions and we understand that the ND government, with its various actions, having the support of other bourgeois parties, such as SYRIZA, is moving in the direction of the so-called “co-exploitation” of the Aegean, that is the withdrawal from sovereign rights in favour of the big capital and the “unity” of the southeast wing of NATO and not of the peoples.

The Greek military expenditure, even amid a worldwide pandemic, is increasing. What is the cost of all these to the Greek economy? How does the government justify all these imports, the French Rafale aircraft, US F-35s etc.? We are also observing that the government is not only buying war machines but also opening up more and more territorial areas for NATO and US bases. For whom will serve all this militarization?

We are talking about billions that will be paid by the people in the name of strengthening the “preventive power” of the armed forces of the country. The bourgeois governments of ND, SYRIZA and PASOK, invoke the “Turkish danger,” like Turkey, which is clearly more powerful in military terms, continues to occupy a part of Cyprus, has invaded Syria, questions treaties that define the borders and the sovereignty of the Greek islands, even inhabited ones, while threatens Greece with war (casus belli since 1995) in the case it implements the International Law of the Sea. Therefore, we are witnessing the following paradox: two NATO member states (US and France) are selling weapons to another NATO member state (Greece) in order to protect itself from a third NATO member state (Turkey).

All those years, the KKE has been firmly voting against the anti-popular budgets and military expenditure. It stresses to our people that this expenditure is not based on the criterion of the real defence needs of the country, but of NATO's needs, in order to serve the plans of the Greek bourgeoisie, which seeks more benefits, drawing the country deeper into imperialist plans and interventions, proliferating foreign US-NATO bases in the country, targeting and entangling our people in rivalries that have nothing to do with popular interests.

The people entered 2021 with some hopes for a better world but perhaps with greater fears and questions. What, in your opinion, will be a just and right solution regarding the borders and the sharing of resources in the region?

The borders, as well as the treaties that define them, cannot be questioned. This applies to the Treaty of Lausanne of 1923 and the Treaty of Paris of 1947 because -as life has proven- borders always change with bloodshed, causing unbearable suffering to the peoples, casualties, refugees and material damage. The workers must resist any attempt that questions them. The problems concerning the Greek-Turkish relations are those of the continental shelf and the EEZ. Unfortunately, these issues are entangled in imperialist competition and the contradictions that manifest themselves among the bourgeoisie and the imperialist unions. That is why it is difficult to be resolved and much more in a fairway. The wealth-producing resources, which under conditions of workers' power where the people are in charge are an asset for peoples' prosperity and cooperation, under conditions of monopoly capitalism, i.e. imperialism, are a bone of contention among monopolies that causes wars and ecological disasters.

Our peoples, the peoples of Greece and Turkey, can and must reach a solution! They can live the life they deserve, based on the satisfaction of their contemporary needs, to come to an understanding and live in peace. However, this can only happen in conflict with all those that undermine their future, that is, the interests of a minority, the exploiters and their allies. 2021 must be a starting point in this direction of rupture, which presupposes the continuation of the close comradely relations between the KKE and the TKP, joint action and a significant strengthening of the CPs in both countries for the benefit of the two peoples.