Greece International Committee of Détente and Peace (EEDYE) has sent a solidarity message to Turkey's Peace Committee, noting that the recent earthquake in the region has revealed the irresponsibility of the Turkish and Greek governments. 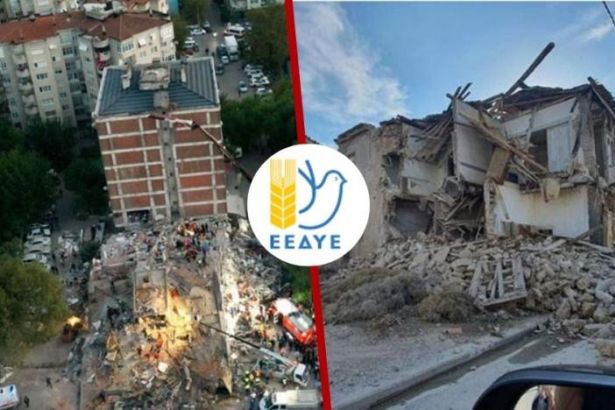 Greece International Committee of Détente and Peace (EEDYE) has expressed warmest solidarity and support to the Peace Committee of Turkey for the peoples of Turkey's Izmır and Greece's Samos, who were affected by the recent earthquake as dozens of victims, hundreds wounded, and incalculable property damage occurred in both countries.

On the latest developments regarding the catastrophic earthquake, EEDYE has said, "The earthquake shows the lack of protection measures and long-term irresponsibility of both Greek and Turkish governments in the most characteristic manner. The capitalist class leaves people on both sides of the Aegean unprotected from natural disasters." The statement has also said:

"In a period of escalation of contradictions, competition and aggression between the Turkish and Greek bourgeoisies ... The conflicts between the bourgeoisies of the two countries are foreign to the needs and real interests of the peoples."

The statement has indicated that the governments of Turkey and Greece are incapable of taking measures against earthquakes and fulfilling their long-term responsibilities due to the priority of monopolies in the construction sector to make profits in both countries.

Listing the measures to be taken regarding the earthquake, EEDYE has emphasized that the achievement of a true peace and permanent friendship is only possible if the workers of the two countries take their own destiny in their hands as the Turkish communist poet Nâzım Hikmet said, "turning the darkness into light".

EEDYE has also shared a solidarity message with the Peace Committee of Turkey.

The Greek Peace Committee has stated that the earthquake once again showed that an unhealthy structuring emerged since capitalism prioritized the greed for profit. The statement has emphasized that this situation will not change as long as capitalism prevails, and that the workers of both countries should make their own paths for a permanent peace as there is nothing that the peoples of both countries cannot share.