Germany, which continues its restrictions on arms sales imposed on the Turkish government, stated that it considers the risk of Turkey’s offensive use of German weapons in disputes with the Kurdish groups or regional conflicts 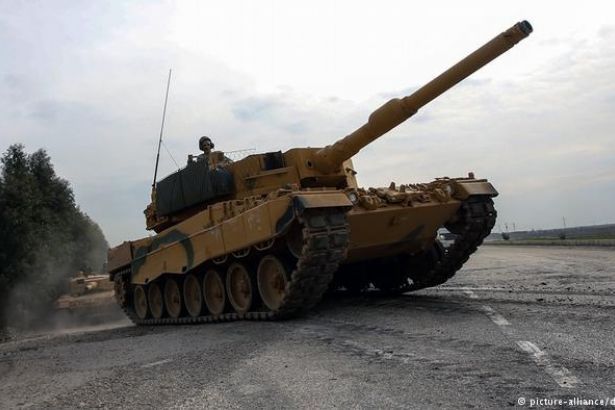 Calling on Turkey to cease the cross-border operations in Syria, the German government said that Berlin considers the risk of Turkey’s offensive use of German weapons in disputes with the Kurdish groups or in regional conflicts when the Turkish government demanded to purchase military equipment from Germany.

A parliamentary question to the German government tabled by the Left Party (Die Linke), which is against the arms sales to Turkey, has been answered by the Ministry of Economic Affairs and Energy.

‘TURKEY’S PURCHASE REQUISITE FOR ARMS WAS LIMITED BY BERLIN’

Pointing out the cross-border operations carried out by the Turkish Armed Forces in Syria, the Left Party asked whether Turkish government’s military operations in the northern region of Syria have affected the approval of the German government’s arms export to Ankara.

In response to this question, the German Ministry of Economic Affairs and Energy argued that the government has followed a highly responsible and restrictive policy on the export of military equipment.

‘SECURITY INTERESTS OF GERMANY ARE THE PRIMARY CONCERN’

Underlining that the German government scrutinizes all applications made by German corporations for military equipment sales to Turkey "considering German foreign and security interests", the Ministry said that the applications regarding the export of military equipment have been investigated in much more detail especially after the process of Turkey’s failed coup attempt on July 15, 2016.

The Ministry also emphasized that Berlin considers the risk of Turkey’s offensive using of German military equipment in disputes with the Kurdish groups or regional conflicts in this issue.

‘CALLING ON TURKEY TO AVOID MILITARY OPERATION IN SYRIA’

In the parliamentary question, the Left Party also asked Turkey’s military operations against the Kurdish People’s Protection Units (YPG) and the debates on possible Turkish offensive in the east of the Euphrates.

Saying that the German government engages in dialogue with Ankara in these issues, the Merkel administration pointed out that Germany called on Turkey to avoid any military actions in Syria.

"The German government called the Turkish side many times to act responsibly and avoid military operations in the Syrian context. In the same way, we and our other important partners also brought Turkey’s offensive against the YPG positions in November to the attention of the Turkish government in a critical way," the Ministry stated.

Regarding the question whether Turkish army used German military equipment in the military operations against the YPG in northern Syria, the German government responded: "There is no information in the Federal Government that German weapons are being used by Turkey’s military operations in Syria."

TURKEY WANTS THE ABOLITION OF RESTRICTIONS

In the recent official talks with Germany, Turkey has taken particular steps towards the abolition of restrictions on the arms sales and the approval of arms shipments by emphasizing on the relations among the allies within NATO.

While the German government approaches Turkey’s wish with caution due to the reactions from public opinion and the political opposition, Berlin is loath to take a step because of possible uncertainty and instability that would be caused by Turkey’s new military operation in Syria.

As Germany has almost stopped ammunition sales to Turkey, the arms sales have largely been limited with the past approvals and the military equipment used in the navy.

Germany, one of the biggest arms exporters, exported weapons and other military equipment worth 3.79 billion euros to third countries in 2017, Spiegel reported last week.

A DECLINE IN ARMS TRADE

Last year, the German government had made 138 weapons deal worth 34 million euros with Turkey’s ruling AKP, while this amount was 83.9 million euros in 2016. During the first half of 2018, Germany’s arms exports to Turkey have dropped from nearly 10 million euros to less than 1 million euros in the aftermath of the Turkish occupation of Afrin province in Syria and the failed July 15 coup in Turkey in 2016, according to data provided by the German Ministry of Economy.

Especially some of the German politicians had widely criticized the plans to provide Turkey with tank modernization upgrades after Leopard 2 tanks were spotted taking part in Turkey’s military operation against the Kurdish YPG in northern Syria’s Afrin.

It seems that the weapon deals Germany made with the Turkish government have drastically decreased compared to recent years.