Academics have declared their support for Boğaziçi Univesity, which has been rocked by weeks of demonstrations protesting his appointment of a new rector with government links 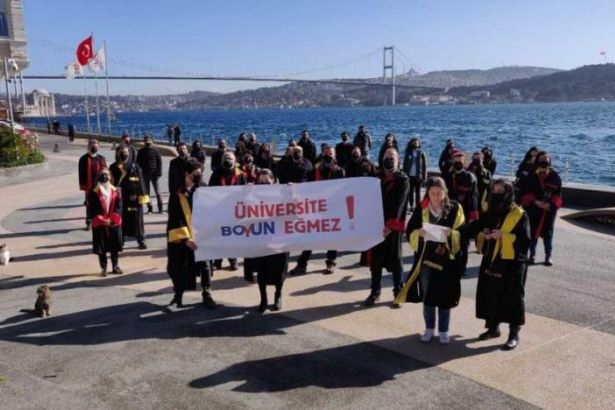 Faculty members emphasized the demand for the immediate release of the students under custody, arrested, or under house arrest and will not stop defending universities.

"We agree with the objections of students and academics against the appointment of the rector to Boğaziçi University. We stand by the rightful resistance that started at Boğaziçi University and received support from all over the country against this imposition in disregard of the will of the university components and democratic practices. We repeat: This appointment is not legitimate!" said Galatasaray University academics.

Melih Bulu – who stood as an AKP parliamentary candidate in 2015 – was appointed rector of Boğaziçi University by President Recep Tayyip Erdoğan in a presidential decree issued on Jan 1. For over a month, students, faculty members and alumni of Boğaziçi have protested Erdoğan’s appointment of Bulu, demanding an election to choose a rector from the university’s faculty. The selection broke with a long-standing tradition of electing rectors from within the university.

Students began protesting on Jan. 4. Police carried out home raids in response, detaining students in the early hours of Jan. 5.

Bulu holds a doctorate from Boğaziçi's business management program but has never been a full-time academic at the university. He is accused of plagiarism in his dissertation and published articles.

"Universities are institutions that produce science and provide public service. The opening of a new faculty, department, institute, and staff organization in a university should be determined according to scientific criteria, not political decisions. Boğaziçi University acts to defend academic freedom and autonomous-democratic university with its academicians, students, graduates, and administrative staff," Galatasaray University members also stated.

After the protests began, Turkey's interior minister condemned protesters as "LGBT deviants" in a Twitter statement.

"Their demands are also our demands as Galatasaray University academicians. We stand against all kinds of hate speech and discriminatory language targeting students and academicians, especially the LGBTI+ community. We will not stop defending our universities,"  said academics.

Erdoğan has accused student demonstrators of being terrorists for protesting his appointment of the new rector at Boğaziçi. "This country will not be run by terrorists," he said. "We will do whatever is needed to prevent this. …We have not stood with terrorists, and we will not."

Since 2016 Erdoğan has reserved the right to directly handpick university rectors, previously appointed through elections.

The new rector is the first to be chosen from outside the university community since the US-backed 1980 military coup.