Turkey’s Justice and Development Party government attempts to suspend the most fundamental rights of infected healthcare workers who are at the forefront of the struggle against COVID-19 pandemic. 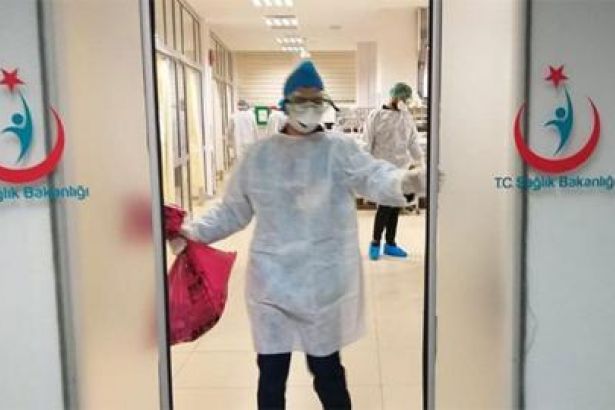 The Social Security Institution (SSI) defines occupational disease as ‘‘a temporary or permanent disease, motor or mental disability caused by the quality of the work carried out by the insurance holder or by working conditions’’ while describing the concept of work accident as ‘‘when the insurance holder is at the workplace’’.

Yet, workers who have become ill or lost their lives in hospitals, pharmacies, markets, factories and many other lines of work during the novel coronavirus pandemic, COVID-19, must have been considered within this context of the SSI definitions, the Turkish government has taken no legal step for them so far.

The ruling Justice and Development Party (AKP), transferring a fund of $15 billion to the biggest capitalists in the country and making arrangements to prevent them from financial losses during the pandemic, continues to keep silent against the legitimate demands of healthcare workers.

Family physicians who examine many patients every day during the pandemic are one of the healthcare professions that the contagion risk of the disease is the highest.

However, due to a legal arrangement on the family practice system made by the AKP, the Turkish government still cuts the salaries of family practitioners who have been put in quarantine or tested positive for COVID-19 while struggling to treat the patients even if they receive medical reports.

Dr. Özlem Sezen, the Head of Turkey’s Federation of Family Physicians Associations (AHEF), said that they have been struggling against the ‘‘replacement’’ system arranged by the AKP for a long time and that the Turkish government’s this policy has become unbearable in pandemic conditions.

Stating that their risk of infection is very high due to their professions, Dr. Özlem Sezen, the Head of AHEF, noted that even their basic demands have not been fulfilled by the government authorities yet.

‘‘We have repeatedly expressed our needs for medical stuff and protective materials, but our demands in this issue have not been fulfilled, too. We demand wage deductions due to health problems our healthcare workers are exposed at workplaces to be annulled, and relevant legal arrangements to be changed as soon as possible,’’ Sezen also underlined.

AKP’S PROMISE TO HEALTHCARE WORKERS INSTEAD OF THEIR BASIC RIGHTS: ‘MARTYRDOM’

As the AKP government has taken no steps towards a new legal arrangement for the most basic rights of healthcare workers, the Health Minister Fahrettin Koca and fascist İYİP (‘Good’ Party) leader Meral Akşener suggested that the healthcare workers who lost their lives while fighting against COVID-19 should be considered ‘‘martyrs’’.

Yet, the healthcare workers, who have been deprived of their most basic rights and their salaries, strongly criticize such offers made by the government and political leaders because of the fact that no legal arrangements are made for the problems they experience due to the pandemic, and beyond this, a healthy working environment for healthcare professionals has not been created by taking the necessary precautions under safer conditions.

Stating that all of the healthcare professionals working under the conditions of the pandemic should be included in this law, Aydın said, ‘‘The reason behind the healthcare workers to contract the disease is their struggles against the pandemic. This is quite obvious. Therefore, this situation must be recognized as both an occupational disease and a work accident by the Turkish authorities.’’

CHP Deputy Erkan Aydın reminded that doctors also lost their lives while fighting against COVID-19, and added: ‘‘These deaths are recorded as ‘natural death’. Yet, the deaths of our healthcare workers are caused by their works, which is fighting the pandemic. The government considers healthcare workers who cannot go to work due to illness and put in quarantine as if they received ordinary medical reports.’’

‘‘If the authorities accept just the opposite by defining the situation as ‘work accident’ or ‘occupational disease’, they have to remunerate the healthcare workers infected or died by the pandemic and their relatives,’’ he continued.

Pointing out that the healthcare workers, who have become ill or and suffered from health problems so far, also faced with the loss of rights, Aydın concluded that he demands the relevant regulation relieving the poor working conditions of healthcare workers to be enacted as soon as possible.

Turkish officials conceded that medical staff fighting COVID-19 pandemic in the country are among those most affected by the outbreak.

Turkish Health Minister Fahrettin Koca on April 1 had informed that at least 601 medical workers, including doctors, nurses and other staff, have been infected by the novel coronavirus.

Health experts and medical unions have been continuously calling on the Turkish government to improve the working conditions and the protection measures of healthcare workers who are on the front line in the struggle against the rapidly spreading outbreak.

Yet, doctors in the country have complained of the government’s insufficient action to provide them with protective materials and medical stuff.

As of April 8, the number of COVID-19 cases has increased by 4,117, bringing the total number of cases to 38,226 with a death toll of 812 after 87 people have lost their lives on Wednesday, according to the latest data announced by the Health Minister Fahrettin Koca.