On the 66th anniversary of the attack on Moncada Barracks, an important turning point in the triumphant struggle of the Cuban Revolution, José Martí Cuba-Turkey Friendship Association organized an event at the Istanbul Nazım Hikmet Cultural Center 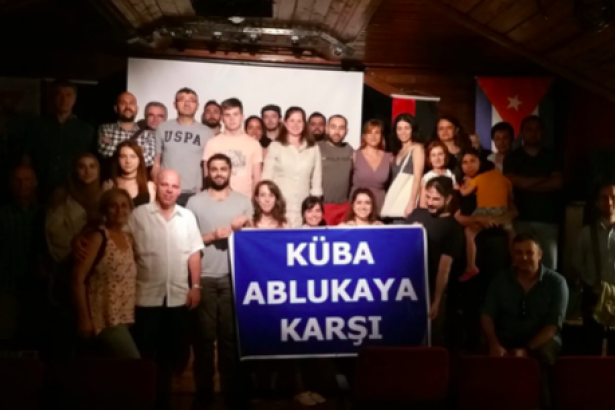 José Martí Cuba-Turkey Friendship Association held an event in Istanbul Nazım Hikmet Cultural Center for the 66th anniversary of the attack on Moncada Barracks. Consul of the Republic of Cuba, Mayvet González Fernández, embassy officials and many Cuban friends attended the event.

The first speech was made by the José Martí Cuba-Turkey Friendship Association Secretary-General Hakan Bulut in memory of the day of the attacks on Moncada Barracks and Carlos Manuel de Céspedes Barracks in Santiago de Cuba on 26 July 1953.

In his speech, Bulut highlighted the history of July 26, which the Cubans celebrated as the National Day of Rebellion, and the importance of the day in the struggle for the Cuban Revolution. Bulut also noted that July 26 is important in terms of the struggle of the people of Cuba as well as the peoples of the world.

The Consul of the Republic of Cuba, Mayvet González Fernández, stated that the July 26 attack was a united action under the leadership of Fidel Castro Ruz to overthrow the dictatorship of Batista, and a crucial political turning point on the road to the revolution.

"Now it is the turn of the followers of the historical generation, invincible from all wars against the main enemy, against North American imperialism. The youth took the torch after giving the test that they could continue to carry it," she added.

Fernández ended her speech after thanking the friends of Cuba coming together on a memorable day for the Cubans, José Martí association and the Communist Party of Turkey.