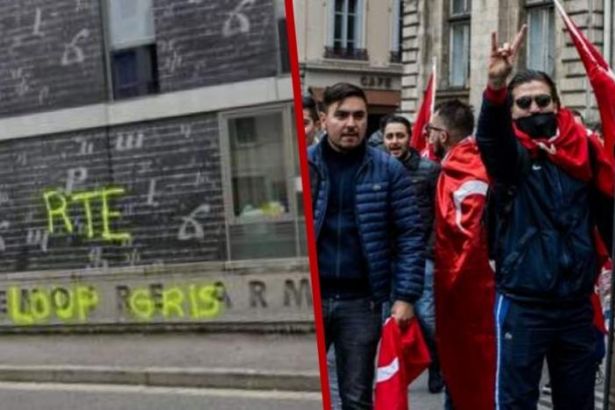 French Interior Minister Gerald Darmanin made a statement at the parliament after a monument dedicated to the "Armenian Genocide" faced an assault in Lyon. "We are talking about a specifically aggressive group," he said, referring to Turkey's 'Grey Wolves'.

According to Sputnik, Darmanin's statement came after an attack to a memorial, in Lyon, to the Ottoman Armenians killed in 1915. The attackers wrote on the memorial "Loups gris" that means "Grey Wolves" in French, and the name of President Recep Tayyip Erdoğan’s shortened version "RTE".

'Grey Wolves' is affiliated with the Nationalist Movement Party (MHP) that is the unofficial partner of Erdoğan's government.

Regional governor Pascal Mailhos shared a message on Twitter, "I strongly condemn the demages, I fully support the Armenian community. Everything will be done to find the perpetrators of this disrespect."

Previously, in Decines-Charpieu, where Armenians are densely inhabited in France, the Wall of Armenian National Memorial Center and and the "Armenian Genocide Monument" were painted with sprays as four people weren injured in a brawl between pro-Armenian and pro-Turkish demonstrators in Vienne.

Later, hundreds of Turks living in the Lyon region took to the street to protest. Hundreds of people participated in the demonstrations in Decines and in Viennes and Le Peage-de- Roussillon, where Turkish expatriates live, while ultra-nationalist groups used threatening slogans in Armenian districts.