Former Prime Minister Ahmet Davutoğlu, one of the leading architects of AKP’s neo-Ottomanist policies in the Middle East, has established a new party against Erdoğan’s ruling AKP. As an Islamist politician, Davutoğlu has a share in all past practices of AKP despite his “refreshed” image 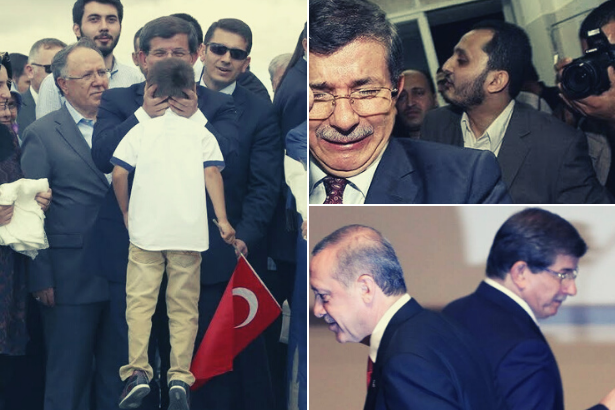 Although Davutoğlu is now attempting to present himself as a “refreshed” political figure with his newly-established “Future Party” in Turkey, he has always been one of the key cadres of the Justice and Development Party (AKP) for nearly two decades. He was widely praised in Turkey and in the West as a “visionary politician” in AKP’s assertive foreign policy.

soL news has prepared a portrait of the former Erdoğan ally, a reactionary politician with a refreshed image, to remind the readers who Ahmet Davutoğlu is and what he has done before his "Future Party".

As a pro-U.S. Islamist academic, Davutoğlu wrote several books and articles. His book “Strategic Depth” was called an influential piece of work in shaping the AKP government’s aggressive policies in the region. However, his “strategic” doctrines for the “new Turkey” proved the opposite, leading to failures and destruction for the peoples of Turkey and the region, particularly Syria.

Former President Abdullah Gül introduced Davutoğlu as an advisor into the political arena, later he became then-Prime Minister Erdoğan’s chief foreign policy advisor between 2003 and 2009. In May 2009, he became Turkey’s Foreign minister with his “strategic depth” doctrine with the aim of providing the AKP government with a larger role in the Middle East.

In 2007, the Economist described him as “an eminence grise, the visionary behind Turkey’s newly assertive foreign policy”. When he became the foreign minister, his book “Strategic Depth” became a bestseller in the country and in the wider region. As the new foreign minister of the time, he became a successor to Ali Babacan, yet another former ally of Erdoğan, who broke his ties with AKP in July 2019 to launch a new movement.

When he became the foreign minister, Davutoğlu said, “First of all, we need to endeavor to turn the relation of zero-problems with the neighbors into a relation of maximum interests. Turkey is not a country that is mentioned only with a region. It is a country of the Balkans, the Caucasus, the Middle East, the Black Sea, the Mediterranean, the Caspian Sea, and even a Gulf country with its influence. In all these regions, Turkey needs to play the role of order establishment.”

The first huge crisis he experienced as Turkey’s foreign minister was the Gaza flotilla raid that took place in May 2010. The Turkish Humanitarian Relief Foundation (İHH), an Islamist and pro-AKP institution, organized several flotilla ships under the control of the AKP government to carry humanitarian aids in order to break off the Israeli-Egyptian blockade of the Gaza Strip.

As the incident culminated in the killing of 10 Turkish activists during the Israeli military raid, it ignited a diplomatic crisis between Turkey and Israel. Although the AKP government under the lead of Erdoğan and Davutoğlu opted for a rhetorical show against Israel, Davutoğlu was Turkey’s Prime Minister later when the AKP government signed an agreement with the Israeli government in June 2016, according to which Israel accepted paying out $20 million to the Turkish government for the compensation of the killed activists.

As Davutoğlu and his party were trying to play the role of big power in the region in an attempt to integrate neo-Ottomanism with the Arab Spring, Davutoğlu’s new model and doctrine failed in many examples such as the Gaza incident and many others.

Davutoğlu was among the biggest supporters of the imperialist-led jihadist attacks against Syria. His government turned Turkey into a home to the international mercenaries and terrorists that attacked the legitimate Syrian government and the Syrian people for years.

His statements were shocking following the car bombings that took place in May 2013 in Turkey’s Reyhanlı town along the Syrian border. As more than 50 people were killed while more than one hundred were left injured in the attack, he was smiling on the TV. He was also widely criticized for referring to the Islamic State militants as “young angry guys”.

In 2014, an anonymously leaked audiotape revealed the existence of a plot by the Erdoğan government to enter into an open war against Syria. It presented as a recording of Turkish military chiefs, then Prime Minister Ahmet Davutoğlu, intelligence chief Hakan Fidan and other senior officials. “I’ll send 4 men from Syria if that’s what it takes. I’ll make up a cause of war by ordering a missile attack on Turkey," Hakan Fidan says in the recording, of which authenticity was admitted by Davutoğlu’s office.

When Erdoğan was elected as the president in August 2014 after the rule of Abdullah Gül, Davutoğlu became the new prime minister of the country. These were Davutoğlu’s best times in his political career considering that he defeated his rivals within AKP in the competition for the premiership. However, when Erdoğan took the lead of executive power at the meetings of the ministerial cabinet, Davutoğlu was getting unhappy with this political model.

As Erdoğan decided to rule the country with presidential powers despite Davutoğlu’s premier office, Davutoğlu’s challenge to this model paved the way for a crisis in AKP. Davutoğlu’s party lost the parliamentary majority in the general elections of June 2015. Since Erdoğan himself prevented Davutoğlu from forming a coalition with CHP, the process resulted in a snap election in November 2015.

As bombs and violent conflicts shook Turkey between June and November, Davutoğlu’s attempts in intra-party competition against Erdoğan failed again despite his party’s electoral success in snap elections.

A group led by Berat Albayrak, Erdoğan’s son-in-law, targeted Davutoğlu by means of the “pelican files” in April 2016, releasing some documents criticizing Davutoğlu for disobeying Erdoğan’s agenda. Finally, Davutoğlu met with Erdoğan in May 2016 and announced his resignation as the leader of AKP.

Like Abdullah Gül and Ali Babacan, Davutoğlu has been a leading figure throughout the rule of AKP for 17 years. Davutoğlu’s new party is not expected to attract a considerably important part of AKP. As he is trying to “purge” himself of AKP’s past nastiness in foreign policy, now he declares that he will embrace “everyone” with his new party while he says that he is still committed to the founding philosophy of AKP.

The opposition parties such as the Republican People’s Party (CHP) and the Good Party (İYİP) lend a hand to Davutoğlu’s newly-formed Future Party with the thought that they have found an AKP-rooted partner for their anti-Erdoğan coalition. They are trying to get rid of Erdoğan while their political motives resemble Erdoğan’s AKP.